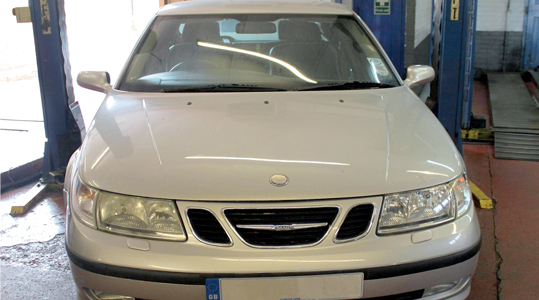 First introduced in 1997 to replace the 9000 model, the first generation 9-5 was a huge step forward for Saab. It proved a popular model in the UK with over 47,000 models sold until it was discontinued in 2010. A clutch replacement on the 9-5 can be a little tricky but with guidance from LuK the whole process will become much easier.

Nothing out of the ordinary is needed to complete the job; the only special tools required are a transmission jack, an engine support beam and a long axle stand. A two-post ramp was used in this example because a four-post ramp may not provide enough clearance. For safety reasons its considered best practice to disconnect the battery earth lead before commencing work. If the vehicle has alloy wheels it may be fitted with anti-theft wheel bolts, so make sure you have the key before you start.

Unclip the satellite fuse box (pictured, below) and pull out the tray.

Remove the large fusebox near the n/s suspension turret (pictured, below) and stow it to one side.

Clamp the hydraulic pipe connected to the slave cylinder (pictured, below) and disconnect it from the gearbox. Do this by removing the circlip and pulling the connection sharply upwards.

Making ties
Support the engine and secure the radiator and steering rack using cable ties. Undo the large nut on the gearbox mounting and undo the four bolts securing the rubber gearbox support and lift it out. Remove the bracket on top of the gearbox by removing the three bolts and undo the accessible upper bell housing bolts Raise the vehicle and remove both front wheels. Lower both plastic undertrays and the o/s and n/s wheel arch liners. Undo the hub nuts and release the lower arms on both sides by removing the single torx bolt (pictured, below).

Release the steering track rod ends and the anti-roll bar linkage on the suspension struts. Undo the exhaust down pipe (pictured, below) and the connecting rubbers. 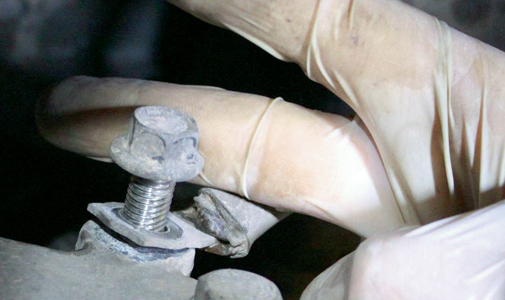 Check the DMF
With the clutch removed, check the dual mass flywheel (DMF) for signs of heat stress and evidence of grease loss. The DMF should also be tested for freeplay and rock between the primary and secondary masses, LuK tool number 400 0080 10 is specifically designed for this purpose on all LuK manufactured DMFs. Full instructions and tolerance data for all LuK DMFs are contained on a CD which comes with this special tool.

Clean the first motion shaft splines and any debris from the bell housing (especially important when a release bearing has failed). Put a small dab of high melting point grease (not a copper-based product) on the first motion shaft splines and make sure the new driven plate slides freely back and forth. This not only spreads the grease evenly, but also makes sure you have the correct kit. Wipe any excess grease off the shaft and driven plate hub then, using a universal alignment tool and checking the driven plate is the correct way round (note “Getriebe Seite” is German for “Gearbox Side”), the clutch can be bolted to the flywheel evenly and sequentially.

Before fitting the gearbox make sure the locating dowels are in place and not damaged. Refit any that have become dislodged and refit the gearbox. Make sure the gearbox bell housing bolts are secured before lowering the jack.