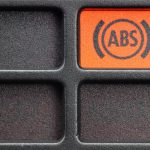 What Caused the Volvo to ‘Brake’?

A 2008 Volvo V70 with a D5 turbocharged diesel engine was towed to a garage after breaking down on the road. The car wouldn’t crank, there were some warning lamps illuminated on the dash and the brake lamps were on.

As a first step, the garage set about checking the battery, to make certain it had enough power to crank the engine. They then plugged in their diagnostic scanner to read the Diagnostic Trouble Codes (DTCs).
Much to the mechanic’s surprise, only airbag trouble codes were displayed. The ABS and Engine Management fault lamps were both illuminated on the dashboard, but his scanner couldn’t display any DTCs from these systems. A quick check of the physical connection between the car and the scanner,
and a check to see that the scanner was switched on and connected to the car, failed to sort the problem.

Faced with these two sets of contradicting facts, it was time to start at an even more fundamental level. The scanner came under suspicion, but when connected to another car it worked as expected. Two other brands of scanner were then borrowed from nearby workshops, but the results were the same – no DTCs from either the Engine Management or ABS systems could be seen.

As luck would have it, I’d come round to the garage to collect a car for a training course being held the next day, so I offered to have a quick look to see what could be done. This car was equipped with CAN-Bus, so there was no direct wiring between the components; all communications between components is over a network.

Because multiple scanners alone had been unsuccessful on their own, I attached a breakout box to the data port of the car. The breakout box allowed me to see what activity there was at any pin in the connector. On this Volvo, with the key on and engine off, there should have been network activity at 6 & 14 and also on 3 & 8. There was activity on 3 & 8, which was the network that controlled the airbags. There was also no activity on 6 & 14, which was the network that controlled not only Engine Management, but also the ABS. That explained why the scanners had all failed – the network that was supposed to report the DTCs wasn’t working!

Given that there was only one network active, the next step was obvious: you do what you can do and see where that gets you. A quick scan of the airbag network showed a total of at least 15 faults, all CAN-Bus
related. Once these faults were cleared there was network activity between 6 & 14, meaning the Engine Management and ABS could now be scanned.

There were also at least 15 DTCs on each of these systems and, as would be expected, all but one were CAN-Bus related. The remaining fault code related to the brake light switch, and it was the only fault code that was not CAN-Bus related.

Do you remember that the brake lights were on at all times? When the brake light switch was unplugged, the car started and ran perfectly. The source of the problem had been identified in less than 15 minutes, with the proper tools and knowledge of how the control network on this car really works.

While the breakout box wasn’t essential in solving this problem, it did provide a bit more information, and it confirmed the nature of the issue. The problem could’ve been sorted without a breakout box, by using the scan tool to look at the airbag system, clearing those codes and then checking the other networks as they would have come back to life.

Now the question you should also be asking is: ‘How could a faulty brake light switch bring the entire car to a stand-still?’ The initial fault was reported and caused a cascading series of discrepancies in the
network that created more faults, relating to the CAN-Bus network. These new faults caused even more faults.

The faults accumulated in the system until it became paralysed and simply switched itself off, either incapable of resolving too many conflicting messages, or believing that some serious problem existed that might cause damage to the car.