The braking problem had endured over the course of a few months. It had started with the owner of the vehicle purchasing the vehicle and requesting that the brakes are replaced. A couple of months after the brakes were replaced, the owner reported squealing noises at low speeds, as well as a burning smell. Upon removing the front discs and pads, the garage discovered that the NSF outer (or finger side pad) had worn down considerably more than the inner pad.

Suspecting that this was a caliper issue, they replaced the caliper together with a new set of discs and pads. However, after this replacement, the owner still complained of a squealing noise and an abnormal braking sensation. The garage, suspecting that the issue was with hydraulics further up the brake system, chose to replace the hose in case of a blockage. Following best practice, the garage ensured that the sliders were cleaned and relubricated to ensure free movement of the braking components. Unfortunately, this still did not resolve the issue and, suspecting a faulty caliper, the garage decided to replace the caliper twice more without success. Apec’s Techmate team were contacted to provide some assistance to resolve the issue. 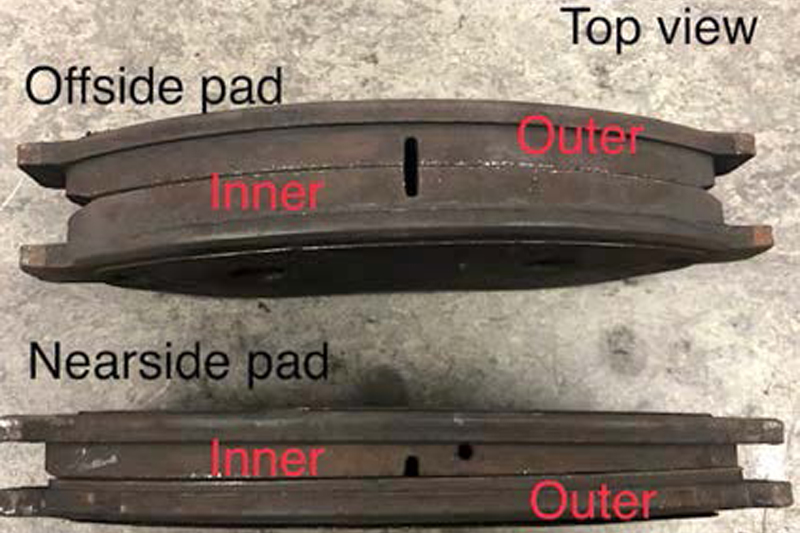 After a test drive to confirm that the symptoms were present, the vehicle was stripped so that the parts could be inspected and measured. Contrary to the garage’s diagnosis that the caliper piston was seized and that the outer pad (finger side) was wearing prematurely, Techmate suspected that the actual issue was due to the outer pad not returning after the brake pedal had been depressed. As a result of this, the outer pad would have been left in contact with the brake disc, causing the brake pad to wear prematurely.

However, to ensure that there was no issue with residual hydraulic pressure causing the caliper to bind, a hydraulic pressure gauge was attached to the caliper to confirm this. With the gauge attached and without any pressure on the brake pedal, no pressure was recorded on the gauge. To ensure that the caliper pistons were moving freely, hydraulic pressure was blocked to the caliper by clamping the brake hose, which was then followed by pushing the pistons back into the caliper with the bleed nipple undone. The brake fluid expelled could then be examined to ensure its condition and eliminate it from being contaminated, which would cause the piston to seize. The caliper pistons retracted easily, which indicated that they could move freely without any obstruction. The brake fluid expelled wasn’t contaminated, and this proved that the brake fluid wasn’t causing the pistons to seize. With the caliper removed, the brake pads were moving freely in the carrier and there was enough lubrication to assist with movement of the pads. The sliders were moving and had abundant lubrication to assist with movement. 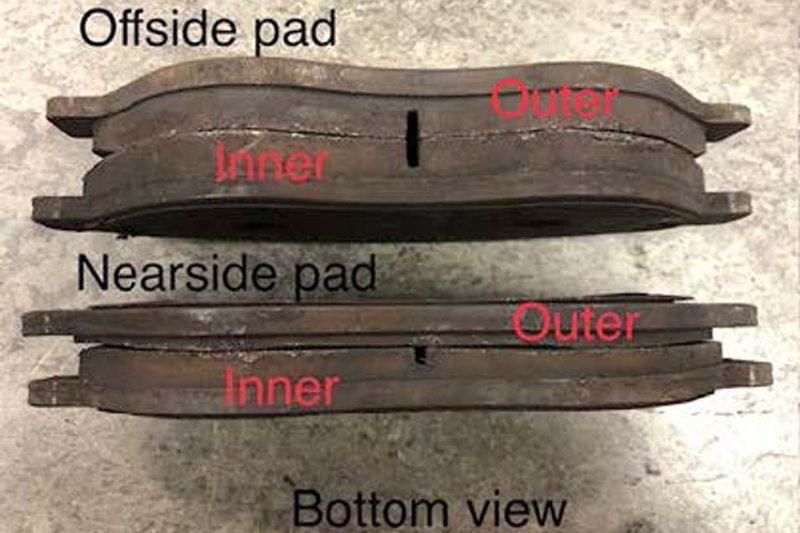 As all components had been proven to move freely when disconnected from each other, Techmate suspected that a component may have been misaligned. Due to this misalignment, it would prevent the outer pad from returning. To confirm that the brake disc was in alignment, a runout measurement was taken to eliminate the brake disc as a source of misalignment. The maximum amount of tolerance for brake disc runout is 0.08mm. The runout reading was 0.04mm, which eliminated the brake disc.

The other source of misalignment is the brake carrier. If this had been misaligned, the angle would prevent the outer brake pad from returning. To confirm this, a feeler gauge was used to measure the gap between the disc and the carrier, and compare the differences between the nearside and offside.

This confirmed that there was a definite difference in measurement between the two. With the caliper bolted on to further confirm the misalignment, the nearside caliper kicked out slightly, rather than moving laterally when the brakes were applied, indicating a misalignment. The carrier was replaced which rectified the issue.