It is somewhat remarkable that in such a mature sector there remain certain products that are still under developed in terms of their service potential. The auxiliary drive system is one of them, says Dayco.

This may be because historically they have not been specified for replacement in the typical manufacturer’s service schedule or not normally thought of as a safety critical component. However, particularly in today’s accessory-loaded vehicles, failure of the auxiliary belt can, in fact, have very serious consequences.

On a typical, non-motorway journey, the auxiliary belt will regularly run at a surface speed of 25mph – and considerably faster when the vehicle is travelling at higher speeds – so should the belt fail, the whiplash effect can cause substantial damage to the auxiliary components, as well as collateral damage to other parts of the engine.

So, as well as the inconvenience of potentially being left stranded with, for example, power steering failure, the broken belt could wrap itself around the crankshaft pulley and stall the engine, making it unable to be restarted. The vehicle could also suffer from additional damage to components such as the radiator or, worse still, it is not uncommon for the flailing belt to break the timing belt case and for the resulting debris to cause the timing belt to break, with the subsequent, catastrophic consequences.

Complicated, multi-component drive systems are susceptible to issues such as pulley misalignment, which can cause premature belt wear due to material loss from the rib surface. This wear changes the profile of the ribs and reduces the contact area on the pulleys, causing slippage and affecting the performance of the components the belt is designed to drive. In addition, the belt can become noisy, adversely affecting the driving environment for the vehicle’s occupants.

Failure to replace worn components, such as a tensioner, will also cause problems and can result in belt slip and surface ‘glazing’, which will destroy the new belt. It can also result in slippage on the alternator pulley, which can trigger the ‘check engine’ warning light on the dashboard. In addition, a pulley or idler with a worn bearing can cause misalignment and wear to the sidewall of the belt, as well as producing unwanted belt noise.

To avoid these problems, workshops looking to best serve their customers and also maximise the potential of their business, need to ensure their technicians check the condition of the auxiliary belt every time a vehicle enters the premises.

However, wear to a typical EPDM formulated belt is very gradual, which makes it difficult to detect, so technicians should use the vehicle’s mileage as their first point of reference. If the vehicle has covered 60,000 miles or more, the belt should be thoroughly inspected and if it shows any sign of damage or wear, should automatically be replaced.

To help technicians correctly assess the condition of the belt, Dayco has designed the aWEARness gauge, which provides them with three ways to check whether the belt needs to be replaced or is okay to be reinstalled. The two most relevant to an EPDM belt are the wear indicator bar, which highlights material loss, and the profile indicator, revealing whether the belt retains its correct form. Both reflect the level of wear and if the belt fails either check, it must be replaced.

By applying the generally accepted average annual mileage of 12,000 to recent Department of Transport figures, there are almost 18 million cars in the UK that are likely to have covered more than 60,000 miles. So, the vast majority of the cars that enter the typical independent workshop daily, will be relevant for the ‘Check & Change’ rule, thus providing a tremendous business opportunity. 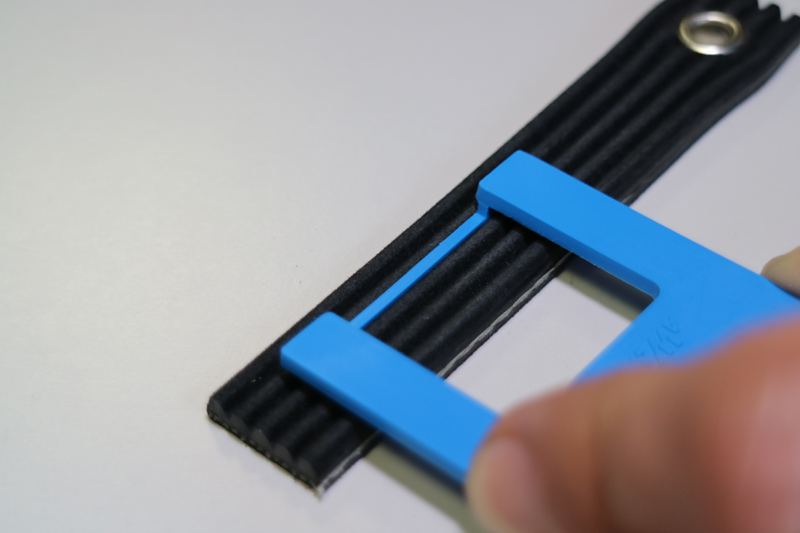 Does one size really fit all?

There is a myth that has gained momentum within the aftermarket that numerous power transmission belt specifications, particularly for the auxiliary drive system, are generic rather than vehicle specific, which is at odds with normal practice for many other engine- related products and completely alien to Dayco’s tailored engineering ethos.

One of the more obvious repercussions of this ‘one size fits all’ mentality has been the resulting problems that have arisen following replacement of the original equipment (OE) auxiliary belt. Despite the practices of some aftermarket suppliers, the OE auxiliary belt is specifically designed to conform to very strict dimensions and so, where replacement belts of a more generic rather than vehicle specific size have been fitted, failures have occurred.

It is, however, not just the belt size that matters, it’s the way the belt is manufactured and for some particular applications, the construction has been improved to include an internal cord that is made with aramid fibres, for example. The combination of non- application specific sized belts and non-conforming construction is a recipe for disaster and with several Volvo applications in mind, the resulting belt failures have not only caused inconvenience and left motorists stranded, but there have been cases when the broken belt has also damaged auxiliary components and even caused the drive system to seize, leaving a hefty bill at the door of the workshop.

However, the policy followed by Dayco is to manufacture only vehicle specific products, which therefore provide independents with an OE quality solution that is designed to the precise specification, in terms of both their dimensions and construction, of the OE part.

When it comes to the construction, the simulation is not limited only to the internal structure, but also the external properties, for example the fabric on the back surface – defined by the code ‘DT’ – of the auxiliary belt, against which the friction wheel on the PRINCE BMW PSA engine used in models such as Mini, BMW 1-3 series, Citroen C3- C4, PSA 208-3008, runs.

By applying this strategy, both the supplying motor factor and installing technician can have complete confidence in the replacement solution, which affords the motorist complete peace of mind.

In addition, Dayco is the OE supplier of the auxiliary belt for the several Volvo applications, so only by fitting a Dayco Poly- V belt can the independent workshop be certain to fit a like-for-like replacement for these and many other makes and models.