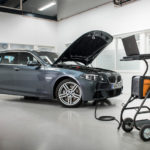 Mike Whitworth, Autospark Ltd, tests the CTEK Pro 60 smart battery charger and support unit – ‘Could I find a place in my workshop for one? Yes, without a doubt!’

Being a diagnostic and electrical specialist, I often require the use of battery chargers. Sometimes I can have three on the go at the same time and still have cars that need a boost or battery support.

Battery support is a term that has become more commonplace in recent years. A battery charger is no lon 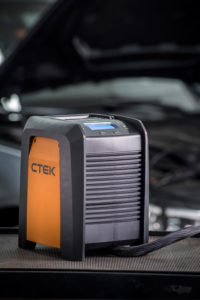 ger just a battery charger. It is now crucial to ensure any unit you purchase is capable of battery support, as well as dealing with the many types of battery technologies available today, including: lithium, calcium, AGM and not forgetting the good old lead acid battery. For this reason, I jumped at the chance to carry out a product test on CTEK’s Pro 60 Smart Battery charger and Battery Support Unit.

First impressions were good. The product was delivered and installed by Tony Zeal, Training Manager from CTEK. Tony gave me a quick demonstration on its use, explained a few important points and then left it with me. The unit is an approximately 12” square block with a sturdy folding handle on top. The clear backlit LCD display is also on the top with functional buttons and indicator leads positioned at the sides of and below the screen. It comes with a 7ft power lead and long 5m heavy duty battery leads with large sturdy strong grip battery clips.

A patented fanless cooling system is employed using convection cooling, which is claimed to improve efficiency and reliability, and despite operating at full pelt (60A) for some time, it didn’t even get hot. The charger can detect polarity and also has spark-free connection, EMC protection, low voltage ripple and low current ripple, input voltage surge protection and burst protection.

Operation is simple, aided by four multi- function keys to allow scrolling through several menus to select the various programmes available. The charge menu allows selection of ‘auto’ or ‘manual’ charging. When auto is selected, the unit will assess the battery and choose the correct charge mode and programme cycle for that particular battery. In manual mode, you can select battery size (AH) and max charging current and also what type of battery you are charging – Normal (lead acid), AGM, Lithium etc. When start is selected, the battery condition is assessed and the correct programme/charge cycle will be applied automatically as before.

“You can change settings in the menu. This includes: display contrast and backlight; language, which covers 13 European tongues; warning buzzer; and factory reset.”

For Power supply or BSU mode, you have the option to select voltage from 12.6 to 14.8V in 0.1V graduations, with max current from 5 to 60A in 5A graduations and memory saver. An important point is that when memory saver is selected, there is no polarity detection and it should be used with care. It is a particularly handy feature when disconnecting and/or replacing a faulty battery.

You can change settings in the menu. This includes: display contrast and backlight; language, which covers 13 European tongues; warning buzzer; and factory reset.

As a test, I decided to take an oscilloscope capture of a standard charger’s voltage waveform during charging on three different current settings. When doing this, I could clearly see regular voltage peaks of almost 2V on the highest setting (see Fig 1). The Pro60 was completely flat with no variation in volts on Power supply mode, once the battery had reached its predetermined voltage.

I also deliberately discharged a good battery and charged it from less than 5V up to fully charged, whilst recording voltage and current on the oscilloscope. This showed and confirmed the various stages of the charge programme over a recorded time of 8.5 hours, including desulphation and reconditioning, which was quite impressive to see.

One thing I did notice was that there was no quick charge option, so it couldn’t be used as a booster or jump start unit. The best option was to use Power supply on 60A and above 14V to condition the battery for 15 to 20 minutes before a flat or low battery would be capable of starting a car. I guess that would be my only criticism, but as it is not sold as a booster charger and not intended for such use, it is probably an unfair complaint.