According to Motorparc data released by the Society of Motor Manufacturers and Traders (SMMT), the number of vehicles in the UK grew 0.4% to 40,506,971 in 2021.

Despite the increase in the parc, major shortages of key components and supply chain disruptions across the globe caused new car registrations to remain broadly static at 1.65 million, with car ownership falling -0.2% to 35,023,652 vehicles. This is the second year in a row the car parc has fallen and the first time the UK has experienced consecutive falls in more than a century.

While this is, in part, thanks to more advanced technology and the greater reliability of new vehicles, the main driver has been pandemic-related market issues. Global shortages of key components – most notably semiconductors – have constrained the new car market and the lockdowns of the past two years closed dealerships. This resulted in consumers being less able to buy new cars, instead holding on to their vehicles.

This contributed to the average car age reaching a record high of 8.7 years, more than a year older than that a decade ago. This means around 8.4 million cars – just under a quarter of those on the road – today are more than 13 years old, having been in service since 2008.

However, a bumper year for light commercial vehicles, which saw the number on the road rise by 4.3% to 4,804,833, contributed to an overall increase in the parc. The heavy goods vehicle sector, meanwhile, saw a 2.5% uplift, with 604,035 trucks in Britain making local, national and international deliveries amid increased demand from key sectors. A decade of year-on-year decreases in the bus and coach parc ended with 1.1% growth last year to 74,451 units. However, the bus and coach parc remained at the second lowest level since records began in 1994, as lockdowns and pandemic-related changes in passenger behaviour saw reduced services and less demand from operators.

Electric vehicle ownership continues to grow rapidly, as billions of pounds of automotive industry investment in zero-emission cars, vans, trucks, buses and coaches delivers an ever-growing choice of models. Nearly three quarters of a million vehicles on the road today can be plugged in, including 720,053 cars, 26,990 vans, 993 buses and 313 trucks. 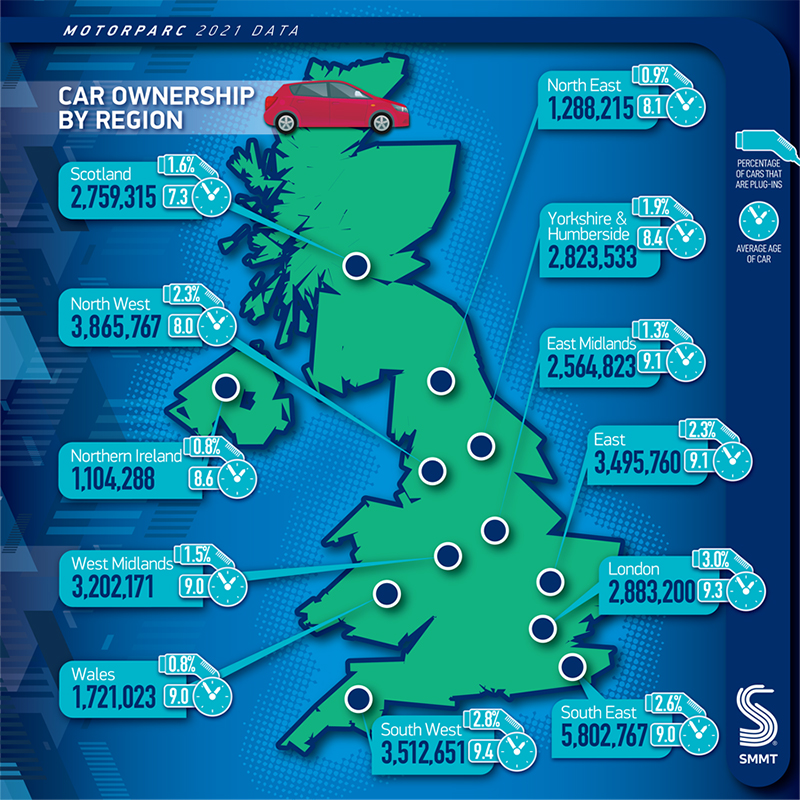 While electric car uptake is growing rapidly, accounting for around one in five new registrations, plug-ins still only represent around one in 50 cars on the road, demonstrating the scale of the challenge ahead in convincing every driver to make the switch. Meanwhile, there are some 20.5 million petrol cars and 13 million diesels making up 58.6% and 37.1% of the car parc respectively, a combined total of 95.7%.

In the commercial vehicle sector, some 0.6% of vans are now plug-in electric, indicating the van sector is around two years behind that of cars despite both vehicle classes having the same end of sale date for new petrol and diesel registrations. Zero-emission public transport is picking up pace, with 1.3% of buses and coaches now battery electric, while electric trucks account for less than 0.1% of the HGV parc, as the development of zero-emission technology for these vehicles continues.

Electric car uptake also varies dramatically across the UK. A third (33.1%) of all plug-in cars are registered in London and the South East, representing 3.0% and 2.6% of all cars in each area. By contrast, 1.5% of cars in the West Midlands are plug-in electric, 1.9% in Yorkshire and Humberside, and 0.9% in the North East. Differences in uptake could also be seen across the four British nations, with plug-ins making up 2.2% of cars in England, 1.6% in Scotland, and 0.8% in Wales and Northern Ireland.

However, the majority of plug-in cars are registered to businesses rather than people, while some 58.8% of all electric cars on the road company registered.

Mike Hawes, SMMT Chief Executive, said: “Britain’s switch to electric vehicles continues to gather pace, with a record one in five new car registrations now plug-ins. However, they still represent around one in 50 cars on the road, so there is significant ground to cover if we are to fully decarbonise road transport at pace.

“The first consecutive annual fall in vehicle numbers in more than a century shows how significantly the pandemic has impacted the industry, leading Britons to hold onto their cars for longer. With fleet renewal essential to net zero, we must build consumer confidence in the economy and, for drivers, confidence in the charging infrastructure to get the transition into top gear.”