IAAF Chief Executive Brian Spratt (pictured below) has been elected as FIGIEFA’s new Treasurer following an election for positions on the organisation’s board of directors.

The member representatives from all FIGIEFA member organisations were eligible to stand and to vote in the elections, held in Brussels, which included filling the positions of President, Vice-President and Brian’s newly acquired role. 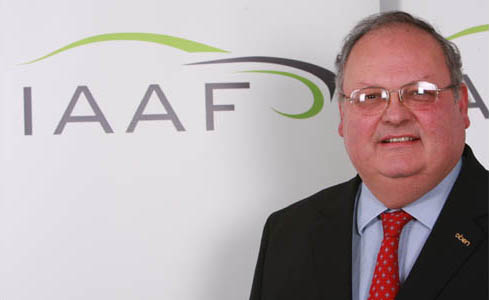 In addition, the President of the German association GVA, Hartmut Rohl, was unanimously voted to the position of FIGIEFA President for the second time, taking over from Michel Vilatte of FEDA of France, who was elected to the Vice-President’s role. .

The other FIGIEFA board members elected at the meeting are: Eric Rommerts from the Dutch RAI association; Christer Liljenberg of the Swedish association SBF;  Polish association SDCM’s President Alfred Franke; and Eyal Tarablus of Turkey’s YPG association. Pedro Barros from Portugal & Bruno Beccari of Italy were the unsuccessful candidates.

Tributes were paid to the service given by retiring board member Bob Davis of the SMMT, who has been FIGEIFA’s treasurer for 16 years.  He was given a gift as a memento of his hard work.

0 0
Previous : Another arrest in counterfeit product drive
Next : Members turn to IAAF for help with Internet directory problems