Dan Morgan, Sales and Operations Director of Lucas Oil Products UK, argues that additive technology is good for cars, for mechanics and for garage revenues.

Additives play important roles in fuel and emissions management. They can help with lubrication to reduce wear, help restore lost power, protect vehicle components and extend the life of a DPF. They reduce the workload for mechanics. They can also combat damage caused by the switch to the latest E10 fuels, which have been introduced to reduce emissions. Crucially, they also add new revenue streams for garages.

Despite all these benefits, additive values for garages and their garage customers are frequently underestimated. Given that the price of electric vehicle alternatives remains relatively high, as long as vehicles with internal combustion engines continue to retain their reliability, the age of the UK vehicle parc is expected to increase.

Consequently, when maintaining cars with ICEs, garages that can include inexpensive preventiatve maintenance management as part of their repair offer, will hold a competitive edge over their rivals.

Additives designed to be used for MOT preparation are among the most popular products. For example, mechanics are happy to use additives such as Upper Cylinder Lubricant as part of their MOT preparation regimes because they can help get a borderline emissions failure under the pass mark.

With UCL added to the fuel tank, the process that cleans injectors and provides better emissions control ahead of an MOT test also restores lost engine power and improves MPG. These are benefits that can be retained with more frequent use of the additive between MOTs. It means more MPG for customers and more sales for garages. Moreover, it contributes to a preventive maintenance schedule with real long-term benefits for the vehicle, as well as savings that customers will appreciate.

If you take a look at the variety of engine oil options on the stockroom shelf, you will appreciate how much engine oil technology has changed over the years. Environmental needs and tougher emissions regulations have driven demands for higher fuel efficiencies and greater engine power. The vehicle and engine manufacturers have responded with oil technologies that have far lower viscosity levels. For example, 0W-16 and the more popular 0W-20, feature in an increasing number of modern engines.

Many of these vehicles are approaching the end of their warranty terms and ought to receive additional care.

These days, such components will often include performance enhancing technologies such as variable valve timing systems and cylinder deactivation. The role of this additive is to improve and sustain protection against wear, reduce engine friction and to discourage sludge production by enhancing oil dispersion. It is compatible with all the above performance enhancing components as well as viscosity sensors. 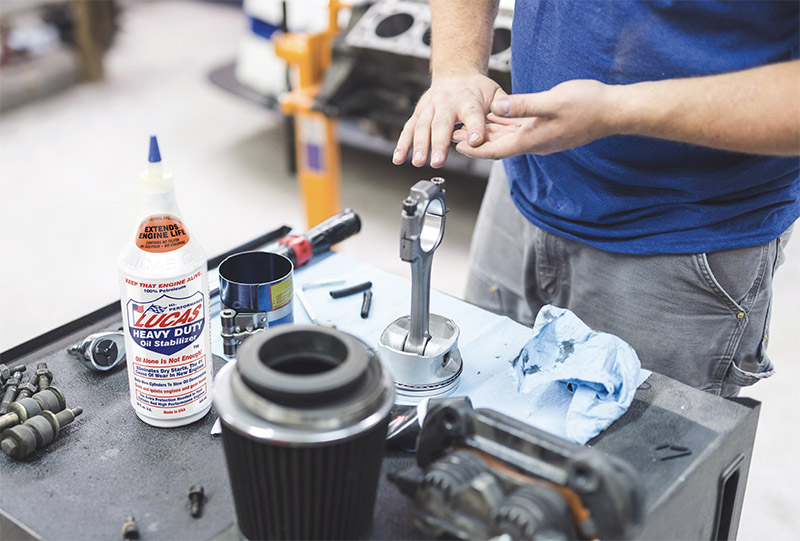 Garages often use an engine oil flush at an oil change. The problem with engine flushing is that afterwards, solvent residues remain and continue to degrade the oil that’s just been added. Lucas Oil prefers to use additive technology to provide extra fortification for the engine oil in the sump, as well as extra protection for the components. Heavy Duty Engine Stabilizer is an additive that can be added to any engine oil at any time to increase performance and improve component protection by:

Garages will notice success with engines known to burn oil. Hidden benefits include engine protection against damage from cold starts. Cold starts cause around 80% of engine damage, which occurs after a restart of vehicle that has remained idle. For example, this could be vehicles that are only used at the weekends, classic vehicles that have over-wintered in the garage, or garage courtesy cars that have stood idle for three or four days. The oil drains down into the sump.

The components become dry and unprotected. Heavy Duty Oil Stabilizer leaves a film over all of the moving parts, which provides protection and protects engines from the damage caused by cold starts.

Warnings last September about the potential for engine damage caused by higher levels of ethanol in the new E10 fuels may have been overshadowed by problems caused by the acute petrol “shortage”.

At that time, and ever since, Lucas Oil has been telling garages how to minimise problems with sound technical advice. For example, more frequent oil changes, advising customers to use Safeguard Ethanol Fuel

Conditioner with Stabilizers to protect engines and components, and advising them to tell their customers to add smaller amounts of E10 fuel to the tank to discourage phase separation. Briefly, the E10 technical problems are these.

Ethanol has hygroscopic characteristics. It absorbs water from the air, which contaminates the petrol in the tank. Phase-separation eventually occurs, which means a top layer of petrol has an underlying layer that consists of an ethanol/water mix that won’t ignite. This layer helps to promote internal metal corrosion and other internal running problems.

Some of these problems relate to high sulphate and copper levels, which accelerate the build-up of carbon and gum on injectors. This compromises MPG and power outputs. It’s also known that the rubber in certain types of older hoses swells and ruptures without warning, because it starts from the inside. Seals and other plastics are also likely to be adversely affected.

As the fuel shortage became more acute, drivers who had heeded the E10 warning, but hoped to address the issues by continuing to fill up with E5, realised It was increasingly difficult to find. Many garages were able to solve the problem for customers by supplying our Safeguard Ethanol Fuel Conditioner with Stabilizer. It was developed for the US switchover to ethanol fuels several years ago and can be used in all affected vehicles.

It pays to become more familiar with additive technology. The use of additives can help garages provide better services for customers, save their customers money, while increasing their revenue options.