Shell has been in partnership with Scuderia Ferrari ever since the inaugural FIA Formula One World Championship race in 1950. But this is only part of the story. Behind the scenes, there is a trialling process for technology that makes its way onto the road. To understand what this involves, Shell invited PMM to the Hockenheimring ahead of the German Grand Prix.

It is peculiar to think that the same engine oil formula you may have just used in your last job is also coursing through the power unit of a Ferrari SF90 capable of churning out over 1,000bhp. Yet, this was the point that was made time and time again as Shell and Scuderia Ferrari representatives explained the cohesive nature of the two companies’ racetrack research.

The relationship was described as one built on ‘co-engineering’ and communication. One side of the partnership would always know what the other was doing. If changes are made to the race car, then Shell would be informed immediately to ensure that the lubricant in use would be able to cope with the adjustment. Collaboration between the racecar and lubricant engineers plays such a crucial role in remaining compliant with FIA (Fédération Internationale de l’Automobile – the federation in charge of F1 motor racing standards) rules that Shell now has its own fuel and lubricant laboratory within the Scuderia Ferrari F1 motorsport camp.

However, all this was explained over the course of the two-day trip to the famed Hockenheimring racetrack, as Shell welcomed motoring journalists from across Europe to find out exactly what goes on behind the scenes.

Day One – ‘From track to road’

After settling in and a period of time to at least partially recover from the early flight, we headed off to get our first insight into how the research Shell carries out at the racetrack finds its way onto roads across the globe. To help communicate this information, the event organisers had recruited some of the brightest engineering minds from within Shell’s motorsport division: Jochen Lach, the project leader for Shell’s engine oil development with Scuderia Ferrari, and Daniel Bernicke, marketing expert for Shell Helix motor oil. 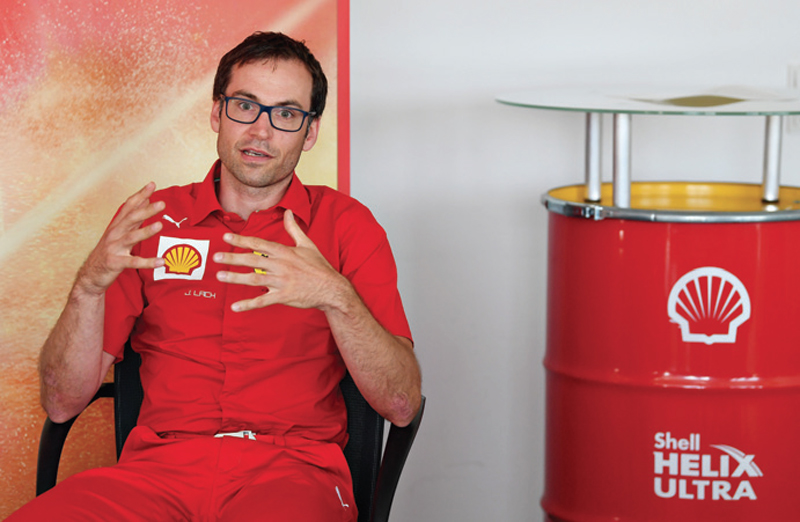 Jochen began by explaining why motorsport is the perfect environment to test products that may eventually make their way into mass production: “Everything that happens to your normal road-going car also happens to the machines you see racing in F1 – except the effects are so much more pronounced should something go wrong. The stress that an F1 power unit and the accompanying engine oil are put under is far greater than those of normal vehicles, which allows us to test our products in the most extreme environments.

“After every race, we take an oil sample, analyse the amount of wear within the oil (this consists of tiny fragments of metal that have broken off from the engine during operation), and then collate this data back at our laboratory in Hamburg. By repeating this process, we gradually gain an idea as to how the oil is interacting with the power unit, and how we can improve the formula should we need to. Eventually, this process allows us to develop an oil for road-going vehicles.”

Having touched upon a number of the most pressing issues within the lubricant industry – engine downsizing, the rising popularity of the turbocharger, and the proliferation of oil grades – the technical discussion came to an end as we were needed elsewhere.

Given the nature of an F1 driver’s job, Sebastian Vettel is hard to pin down. Therefore, we were delighted to find out that we would have a press briefing with Vettel, as well as Mattia Binotto, Scuderia Ferrari’s team principal, and Jochen, later on that day.

Despite his focus on racing, Vettel still appreciated the importance of having this close partnership between Scuderia Ferrari and Shell: “The work the Shell team does allows us to see inside the engine and anticipate anything that may come around the corner that we wouldn’t want to see. The tests act as a kind of alarm system that flags up problems within the vehicle that could potentially prevent me from achieving my ultimate goal – winning races! This being said, I think there has only been one incident in the last five years, which was in testing, not even during a race. This speaks volumes about the quality of the collaboration between Scuderia Ferrari and Shell.” And with that, Sebastian was shepherded out of the room to prepare for the following day’s practice sessions.

Day two and with temperatures soaring to 40°C, we made our way to the Hockenheimring to take in the first two practice sessions of the German Grand Prix. The sessions are designed to give the drivers an opportunity to test out their vehicles, and familiarise themselves with the track and all it has to offer. After the first practice session, we were led into the race paddocks and the Scuderia Ferrari pit to view the workings of the F1 team during a race weekend.

Here is where the collaboration is at its most apparent. As part of the pit layout, Shell has its own race day laboratory that constantly tests and monitors the engine oil and fuel used in the Ferrari car. Paul Johnson, Shell’s Trackside Analyst, was happy to explain what goes on within the confines of the lab: “During each practice session or race, we take a sample of the engine oil, both before and after. This first allows us to show the FIA that the lubricants we are using comply with the rules, but also enables us to tell exactly which engine parts are wearing and which are not. 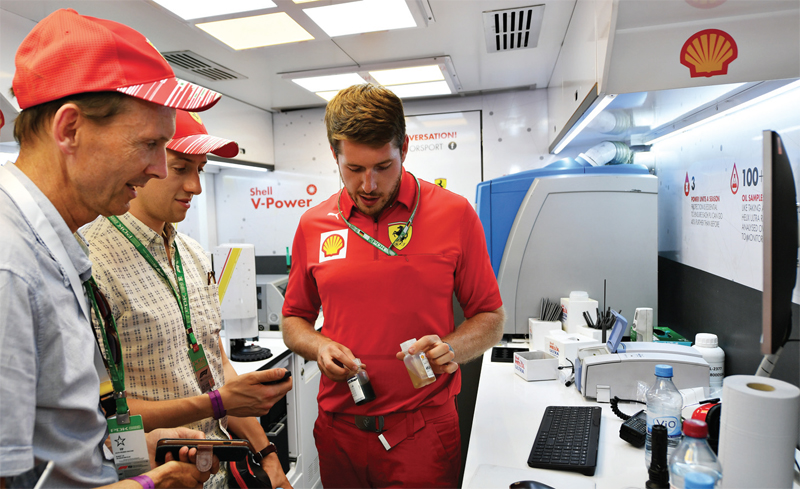 “This is all done through metallurgy; analysing the metallic content of the oil. The difference in the oil between the time it goes into the engine and when it comes out is considerable, and shows just how extreme an environment the lubricant is working in. However, this is also the sort of environment that allows Shell to test new concepts and new components, eventually bringing them to the end consumer.”

Leaving the laboratory behind us, we went to watch the final practice session of the day and experience the end result of what Shell and Scuderia Ferrari work so hard on. With the SF90 power units speeding around the circuit, something that Jochen Lach had said earlier on in the trip sprang to mind: engine oil no longer appears to be a supplement to the rest of the mechanical components that work hard under the bonnet. Instead, it is now more appropriate to view engine oil as an integral part of vehicle production. It is no longer an afterthought, but a component as important to the construction of a vehicle as a clutch or even the engine itself. This certainly appears to be the direction in which lubricant development is heading, and in what ways this will affect the aftermarket, it’s too soon to tell. However, if F1 is the proving ground for new automotive concepts, then perhaps it will generate an answer soon enough.