With the introduction of the ‘Euro 5’ emissions standard in 2009, the incorporation of a Diesel Particulate Filter (DPF) into the exhaust system of diesel passenger cars became effectively compulsory. As petrol prices spiralled at the same time, diesel powered cars, with their improved comfort levels and fuel economy, were gaining in popularity.

An almost ‘perfect storm’ was created, the upshot of which was that many diesels were sold without adequate information for the new owners. Many drivers were unaware that a DPF even existed, let alone what its purpose was and the best way to keep it functioning properly.

The result was that a significant amount of car owners were not doing the necessary amount of high speed miles to ‘regenerate’ (self-clean) the DPF, particularly if they lived in rural or city areas where road conditions and traffic made this process virtually impossible. It wasn’t long, therefore, before the DPFs fitted to these vehicles began to block up, with many garages faced with a regular stream of blocked DPFs.

So what are the most common reasons that can create issues with the DPF? Our technical team have identified the following:

2. The use of the wrong engine oil – low ash, low sulphur oil must be used on DPF equipped vehicles.

5. The additive tank (if fitted) is low or empty – this can make any attempted DPF regeneration unsuccessful and can result in premature blocking. 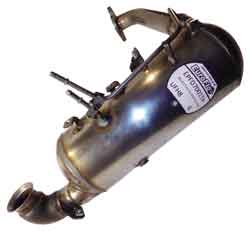 Will a change do you good?
Occasionally some installers simply change the DPF thinking that this will cure the problem, but this will only ever be a VERY short term solution. The faults that caused the original DPF to fail MUST be resolved before the replacement DPF is fitted or the new component will fail – just like the original – in as little as 30 miles.

Go with the Flo

0 0
Previous : 12 days of Xmas – Dickies winter clothes
Next : Causes of DPF failure and how to perform a ‘regeneration’