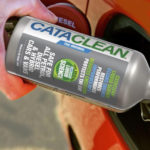 Dalian Ideal Technology Development Co., Ltd. (DIT-China) of Liaoning Province has become the distributor in China for the premium patented, UK-manufactured engine care product, Cataclean. Independent tests have shown Cataclean can clean and protect catalytic converters and improve the engine performance of the nation’s 250 million registered vehicles at the same time as improving their fuel efficiency and reducing emissions. Cataclean is now being shipped into China by DIT for sale anywhere in the country via the online shops www.jd.com and www.taobao.com.

Jeremy Masters, Cataclean’s Hong Kong-based regional representative for Asia, says: “Cataclean has proven itself in rigorous independent tests and has attracted consistently high customer ratings in other markets around the world for several years now, so we’re excited to bring it to the fastest growing car market in the world. Working with our local partner, DIT-China, we look forward to building our business here as a result of the positive experiences of Chinese motorists and industrial users. Cataclean’s emissions-cutting abilities will also be welcome news to those concerned about air quality.”

Cataclean is especially beneficial in markets such as China where lower octane fuels can result in carbon deposits clogging up engines and exhaust systems. Cataclean contains solvents which break down deposits formed by oxidation and polymerisation of hydrocarbon in fuel delivery systems. When Cataclean combusts, carboxylic acids, aldehydes and active proxy compounds are formed. This process has an immediate effect, cleaning and rejuvenating the fuel systems, injectors and valves, and optimising the combination and ignition of the fuel mixture.

Cataclean is a liquid engine fuel and exhaust system cleaner manufactured to a patented chemical formula in Great Britain, for use in cars, vans, motorcycles, and specialist heavy duty machinery. Independent tests verified by faculty at John Moores University, Liverpool, UK, showed that Cataclean sharpened engine responsiveness, cut fuel use by an average of 9.7%, and reduced harmful exhaust emissions by an average of 33%.

When Cataclean’s compounds reach the exhaust vapours, they clean the surfaces inside the catalytic converter, removing deposits from the surface of the core and increasing the catalyst’s ability to remove harmful exhaust emissions such as carbon monoxide and nitrogen oxides.

All that is required to obtain Cataclean’s benefits is to pour one bottle into the fuel tank then drive for at least 15 minutes before refuelling as necessary. The recommended ratio is one 450ml bottle to  approximately 15 litres of fuel. For best results, Cataclean should be applied every three months.

For more information about Cataclean and its range of products, click here.
Tags:CatacleanNews