Banana, or more correctly, “sideload” springs are a familiar sight to most mechanics and many will have struggled with their removal and installation on vehicles fitted with a MacPherson strut suspension. But what is the reason for adopting curved springs on modern passenger cars, how do these springs work and most importantly, what does the mechanic need to know about fitting them in the workshop? 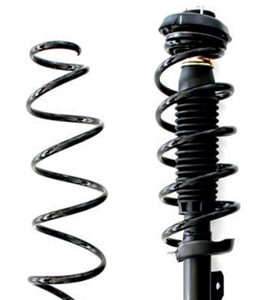 The MacPherson strut offers several advantages to the vehicle manufacturer, including low cost and a relatively few number of individual components – all of which are required for springing, damping and connecting functions. Once the preferred suspension medium for the front wheels on small cars, the MacPherson strut can now be found in medium, large and even sports cars. Today, more than 80% of modern passenger cars are fitted with MacPherson strut front suspensions. This huge increase in popularity is largely due to the development of side-load (SL) springs.

SL springs
MacPherson type suspensions incorporating conventional (“straight”, as opposed to “curved”) coil-springs concentric with the damper tube, produce high lateral forces on the damper rod. These lateral forces can lead to “stiction” on the compression stroke and increased wear of the damper piston rod and sealing rings. These frictional forces can be significantly reduced if the conventional spring is mounted in an inclined position to the damper rod, something that can easily be arranged by offsetting the lower spring seat where it is welded to the shock absorber. But doing so can create a packaging problem, especially on today’s modern cars. The limit of the degree of inclination possible is governed by clearance between the MacPherson strut and the tyre and/or chassis.

In addition, coil-springs having a large body diameter and requiring large diameter offset spring seats, increase the unsprung weight of the vehicle, something the vehicle manufacturer is always looking to reduce! 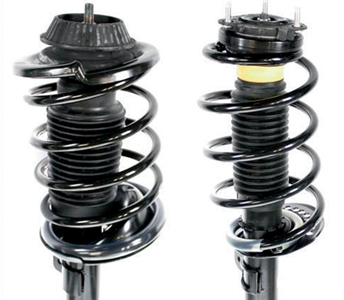 The solution arrived in the form of the SL spring – a compression spring which has an ‘S’ or ‘C’ shaped coil centreline in the unloaded position. The SL spring fits around the damper tube just like a conventional spring and assumes a nearly cylindrical (“straight”) shape during normal operation. The main advantage of the SL spring is that the line of action of its resistance force passes through the spring axis at an angle. This reduces the lateral forces acting on the damper piston rod and thus friction within the damper. And because the SL spring is generally coiled with pigtails at each end, this permits the use of small, lightweight spring seats. In fact, the MacPherson strut incorporating SL spring technology can be up to 2 kg lighter than a conventional strut.

Vehicles with these springs
The small packaging requirements of the SL spring, together with the elimination of stiction and thus absence of any jerkiness in the shock absorber, are the reasons why vehicle manufacturers are today quite happy to fit MacPherson struts across most of their product range. A jerky ride might be acceptable in low-cost, small cars but it is unlikely that it would be tolerated in higher priced, medium and large passenger cars.

Furthermore, the compact SL spring/MacPherson strut unit permits a wider engine bay which can accommodate the larger, V-type engines so often fitted to medium and large vehicles. SL springs were first seen on production vehicles in the early 1990s, specifically on the Audi 80 (B4) and the VW Golf III where they were specified from autumn 1994. They have proven incredibly popular and their ability to reduce wear within the shock absorber is a major contributory factor in improving shock absorber life.

The SL spring performs three functions: firstly it is going up and down, secondly it is influencing steering effects, and thirdly it is counteracting side loads. These springs may look strange, even crude, but the work they do is extremely precise and sophisticated. They can, however, be difficult and dangerous to fit or remove. And of course, by performing three tasks their life expectancy can be reduced meaning they may need replacing more often. 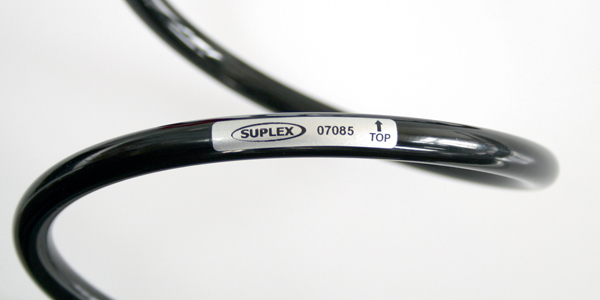 Great care needs to be taken when replacing these springs. Although most SL springs are coiled with pigtails at each end, the pigtails usually have slightly different diameters and the last coils at each end will usually have different helix angles. These springs only perform correctly on the vehicle if they have been fitted correctly! Plastic isolator sleeves are often fitted to the last, lower coil where this seats on the shock absorber. Good aftermarket suppliers will indicate correct coil-spring orientation on the spring itself.

Technical tip – Fact or ‘stiction’?
“Stiction” is friction that tends to prevent relative motion between two movable parts at their null position, in this case the damper rod and the sealing rings. In a shock absorber, stiction reduces damping response when the road wheel is subjected to small load inputs.