Mike Schlup, MD at K-Seal distributor Kalimex, shares an unusual repair story that recently came in from a customer.

Many technicians are familiar with K-Seal Coolant Leak Repair and we’ve heard from so many of you about the wide range of coolant leaks that have been repaired with a quick dose of K-Seal. Every now and again we get a real gem and this case is a prime example. K-Seal fan Joe Guttridge has taken on the mammoth task of restoring a pre-war Rolls Royce, and one problem was to try and fix a persistent water leak. Unable to run the engine, Joe took our advice and decided to rig up a dosing system that allowed the water and KSeal mixture to flow around the water jacket, bypassing the radiator altogether.

An ingenious solution to a tricky problem, as Joe explains more in his own words: 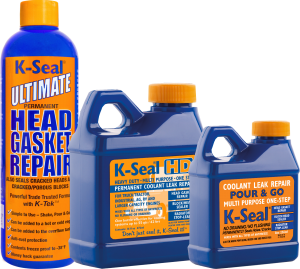 “Adjustable valves on the two outlet pipes allow the differential pressure to be adjusted up to a maximum of 1 bar (15psi) as set out in the test procedure you sent me. I started out with a 15psi pressure at the gauge you can see in Fig 1, and could clearly see a leak in the water jacket at the rear of the tappet chest. This was at a rate of about one droplet (say about 3mm diameter globe) every 20 seconds. I maintained the test for an hour and it did not seal or lessen appreciably. I then chipped back the leakage area to reveal the crack (around a very poor earlier braze repair) and I then progressively reduced the pressure over the next eight hours to around 2psi (say 0.14 bar) and the leak eventually sealed.

I have since maintained it for a further eight hours and leakage appears to have stopped, with some evidence of a coppery coloured deposit around the crack and interface of braze with original metal. The cooling system in its design state has no pressurised radiator cap, so I am hopeful the repair will be good enough to prove the engine and maybe use the car to prove the driveline generally.

I intend to continue running the system as it is with the K-Seal in for some period, and then I will start the engine with the K-Seal still in, but with the car’s water pump providing the pumping power. Hopefully the pressure on the gauge will be at or below the pressure the system appears to have sealed at (approximately 2psi). Only when the engine has run for some time will I feel confident to flush out the K-Seal and refit the correct (honeycomb) radiator”. Mike Schlup concludes: “Thanks to Joe for his detailed feedback. It just goes to show that K-Seal can be used to fix leaks in any type of water cooled engine, regardless of how old or how complex. The key thing is to get K-Seal circulating around the system so it can reach the leak and do its job.”