The VW was travelling north on the M1 when the water pump collapsed. Water poured out in spectacular fashion. It had seized, good and solid. Ian Barber, from Nottingham, takes up the story. He took the call for help from his son – a passenger in the car when it broke down. Later, once the drive system cover had been opened, this is what he saw:

“The belt had not slipped off or broken, but there wasn’t much left of it. Incredibly, the engine had continued to run perfectly after the seized water pump had stripped all but a 4mm wide tooth left on the timing belt. It had lost so much material that it was literally hanging by a thread.”

Amazingly, the cam was still timed to the crank. What’s more, the engine had been re-started several times.

“I couldn’t believe the belt was still intact,” says Ian. “Its sheer strength must have saved the engine, otherwise the repair bill could have cost upwards of around £1,000.”

Although the timing belt had been replaced just over a month earlier, the water pump had not been replaced as part of the job. Impressed with the belt’s “lifesaving” achievement, he took the trouble to report his findings via the Gates website, adding: “As it was a Gates belt that had clearly saved the engine, I made sure that it was replaced with another Gates belt.” 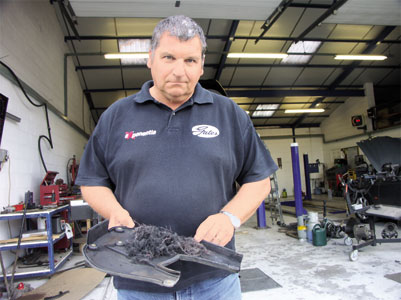 Gates Technical Training and Support Team’s belt diagnostician, Andrew Vaux, is called in by motor factors to inspect belt related installation issues. He explains that once a water pump in compromised, drive system damage is inevitable:

“Once it seizes, the belt continues to run, but the stationary teeth on the water pump will usually shear the teeth completely from the belt. Drive system failure is usually immediate and engine damage is normally inevitable. The quality of the belt this time made the difference.”

He adds that a worn bearing on the water pump will cause the belt to track to one side, make contact with either the engine block or drive system cover and quickly wear down. If there is a coolant leak, the water contamination will cause the tensile cord to fail. “Unchecked, the consequences for the engine in each case is usually catastrophic,” he adds.

Gates advocates the drive system overhaul. It has led the way on water pump replacement in Synchronous Drive Belt Systems. Introduced in 2005, the Gates Kit Plus Water Pump range provides garages with peace of mind. There is a part number for a VW Golf 1.9 of this age. Installing it would have prevented water pump failure in this case. Moreover, the garage is assured that as the water pump and the belt kit are both supplied by Gates, there will only be one inspection in the event of any subsequent issue.

The vehicle is around ten years old and was due for a timing belt replacement and it’s a good bet that, on examination, the water pump “looked ok”. Some installers may take the view that there is money to be saved in trusting the existing water pump. This case proves unequivocally, that even though the water pump seemed sound when the timing belt was changed, the correct course of action is to replace the belt, the tensioner, the idler and the water pump all at the same time.

Smart installers always replace the water pump and it’s a good bet they have fewer warranty issues and less rectification work. Advise the customer that the pump must be replaced as part of a drive system overhaul. According to all reputable data books and technical sources, there is no difference between the standard time for a belt kit installation and the standard time for the job when a water pump is fitted at the same time. It could be argued that the additional cost of the water pump is a small price to pay to insure against £1,000 worth of vehicle repair bills and a lot of inconvenience. Few end users will be as lucky as this VW driver.

0 0
Previous : Clutch guide tubes – why are they so important?
Next : Still time to enter UK Worker of the Year