Two UK drive system installers were left feeling puzzled last month by the same kind of catastrophic engine failure on a specific type of Ford 1.8 diesel engine. These engines were fitted to a wide range of Fords from 1998 onwards. Gates explains.

The first garage reported the problem on a 2009 Ford Galaxy. The second garage, over 200 miles away, experienced the issue with a 2012 Ford Mondeo. In both cases, the incidents occurred a short time after a scheduled timing belt replacement and the installation of a Gates K015541XS belt kit.

The first premature belt failure, on the Galaxy, occurred 10 days after the new Gates belt kit was installed. The second, on the Mondeo, took less than a week. In each case, the timing belt was completely destroyed and the engine seized.

It was clear from the debris produced in both incidents that the belts had tracked away from the engine and made contact with the timing belt cover. Such contact compromises the edge of the belt, which begins to fray, breakdown and fragment within a very short time. Once the belt breaks, engine damage is inevitable. What caused both timing belts to become unstable and track towards the cover?

The cause has been previously identified by Gates and documented in a technical bulletin, TB027. The drive systems on these 1.8L engines are fitted with automatic tensioners. Although the drive belt replacement looks straightforward, there are certain issues that installers need to be aware of before attempting replacement. Engine specific fitting instructions inside this Gates kit make clear that the installation procedure must be followed step by step. 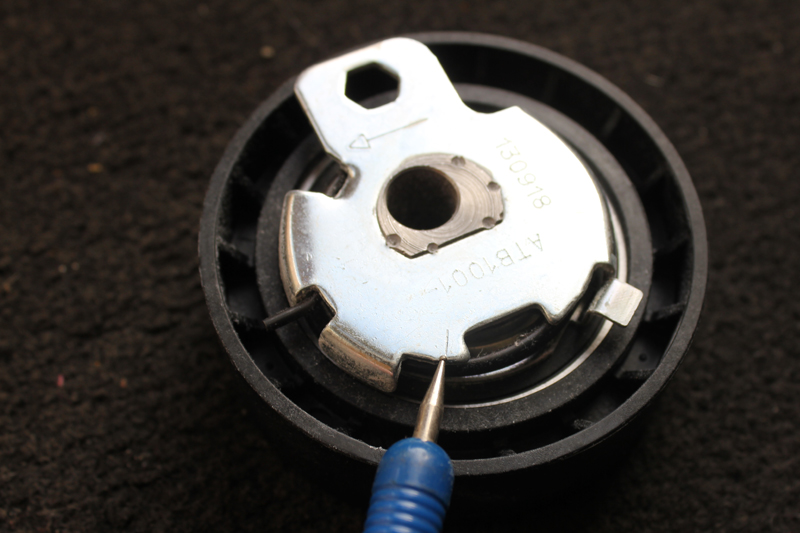 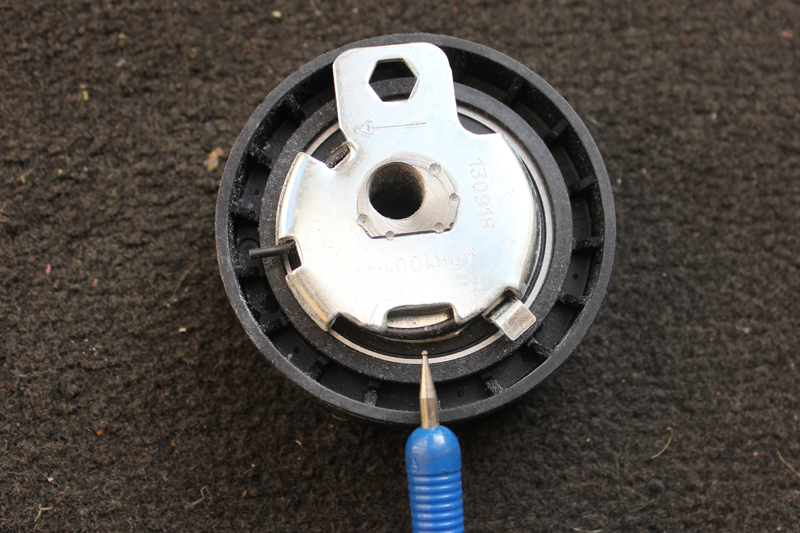 The engine must be positioned at Top Dead Centre (TDC) and it must be cold. Temperature has a significant influence on installation parameters. Specific setting and locking tools (Gates set GAT 4830 and GAT 4394) are required. Key fitting points include:

■ Crankshaft and flywheel must be locked

■ Camshaft must be locked at the rear of the engine

■ Camshaft sprocket must be loosened (while held in place) and free to rotate on the taper. Failure to do so means that the top span of the belt will not be tensioned

During the procedure, the tensioner is rotated anticlockwise. A common error is to line up the indicator with the ‘I’ line on the faceplate of the tensioner. Correct tension is achieved when the indicator is in the middle of the slot, which is adjacent to the ‘I’ line. Hold the tensioner in place and torque the tensioner bolt (50Nm). Use the appropriate tool to hold the camshaft sprocket in place. Torque the camshaft bolt (50Nm). Locking tools may now be removed. Rotate the engine by hand until it is just short of six revolutions. Re-insert the crankshaft pin and rotate the engine to TDC.

If these steps have been followed, the correct tension has been set. Remove locking tools.

A simple online check by each garage would have provided an early warning about the potential fitting errors that can lead to incorrect tension setting on this engine. If the tension is incorrect, the stability of the belt is compromised. Each Gates belt contains ‘S’ and ‘Z’ tensile cords. In addition to strength, these provide twists – in opposite directions. In combination, they provide a balancing effect that stabilises the belt and keeps it centralised on the pulley. However, in order to do so, the tension must be correct. If the tension is incorrect, the belt tracks towards the cover. Friction causes damage to the belt.

By using appropriate tools, consulting available online technical resources and following the installation guidelines provided by the manufacturer more precisely, the premature failure of both timing belts and the catastrophic engine failure that followed would have been avoided. After considering all of the evidence, the conclusion is an expensive reminder once again that depending on experience and making assumptions are not always the most reliable policies.

It’s important to note that, from 2009, these engines have a fuel pump driven by a separate drive belt. This belt needs to be replaced at the same time as the cam belt.

0 0 0
Previous : A Shift in Technology
Next :  Separating the Fact from the Fiction