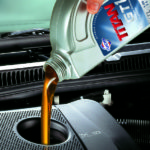 Thin is the new thick. As more aggressive CO2 rules loom, we find out why thinner engine oils can help VMs to meet these targets.

Driven largely by last year’s ‘diesel-gate’ fall-out, VMs are now being urged to use lubricants as an effective tool in helping them to hit new carbon dioxide emission directives. Currently EU law states
that newly-registered cars shouldn’t emit more than an average of 130 grams of CO2 per kilometre (g CO2/km). But, by 2021, the fleet average to be achieved by all new cars is 95 g CO2/km – a 27% reduction.

Realistically, the only way that these figures can be achieved is through an improvement in fuel economy. There are many changes that manufacturers can make to help do this, including improved
aerodynamics and tyres, but enhanced lubrication will also have a major part to play.

“Where we can help is reducing internal friction, and that invariably means making oils of a much lower viscosity. Just a decade ago the standard product was a semisynthetic 10W-40 engine oil, but now we’re
seeing 5W-20s and it won’t be long until we’re seeing 0W-16s in Europe. In fact, some engine oils are now only twice as thick as water when at working temperature.” 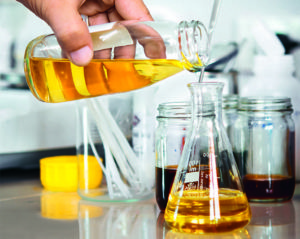 The complexity of modern engines has meant that FUCHS’ automotive product range has expanded significantly, with work taking place alongside OEMs to create lubricants tailored to maximise performance of each engine. Andy adds: “To help meet targets and improve fuel economy, manufacturers are making components with slightly different attributes to assist the lubricant in reducing friction. There are coated piston rings and polymer coated bearings, for example, and the lubricants we produce have to be able to work with these new components.

“We work alongside some of the world’s major OEMs to produce products that exactly match their requirements. The High Temperature High Shear (HTHS) viscosity test is run using oil heated to 150°C and under shear, which replicates what would happen in an engine.

“Testing in this way is timely and expensive but it gives the OEMs the confidence that our products stand up to scrutiny and will help them achieve their required fuel economy and meet their emission limits.”

If the average CO2 emissions of a manufacturer’s fleet exceed its limit value in any year, the manufacturer has to pay an excess emissions premium for each car registered. This premium is €5 for the first g/km of exceedance, €15 for the second g/km, €25 for the third g/km and €95 for each subsequent g/km. From 2019, the cost will be €95 from the first gram of exceedance onwards, meaning those manufacturers that fail to comply will find themselves with hefty penalties to pay.

Andy concludes: “The penalties for not achieving the emissions targets are fairly severe, so it’s vital that they’re reached. Using the correct lubricant will play a hugely important role in this.”