A sudden loss of liquid or a poor response from the engine is usually the first sign(s) that premature filter failure may have taken place.

Besides the normal leakage at the connection, longitudinal or transverse cracks can take place at the transition radius of the fuel spin-on filter housing. With inline fuel filters, the filter housing can corrode at the line connection due to a damaged fuel hose, resulting in water between the hose and connecting piece.

In the case of spin-on oil filters, the filter housing can crack and swell, or the o-ring housing can be pushed out or crack. If the fuel spin-on filter has been installed incorrectly, it cannot withstand the dynamic pressure load and may crack. If the filter connection is leaky, it could be due to a number of assembly errors such as installation in a slanted position, incorrect fitting of the o-ring, re-use of an old o-ring or incorrect tightening torque. 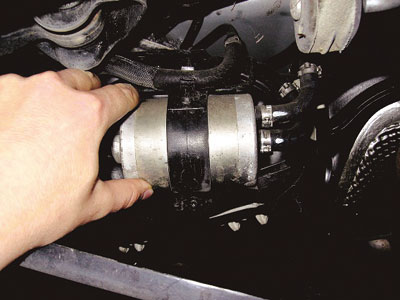 Leaky feeling
Inline fuel filters with aluminium housings can show signs of contact corrosion between the housing and the retaining clamp due to removal or damage to the protective filter film, resulting in a leaky filter. It can also occur if the o-ring has not been replaced or has slipped during assembly, hoses are not correctly connected to the fittings, or the hose clamps are insufficiently tightened.

In addition to problems with the o-ring, spin-on oil filter failure can be traced to a defective pressure limiting valve in the oil pump, incorrect use of a non-approved filter or incorrect tightening. Leakage can be attributed to the same causes as mentioned for spin-on fuel filters, while corrosion can be caused by too greater time elapsing between replacement intervals, or using a special extraction tool to the filter.

The trace is on 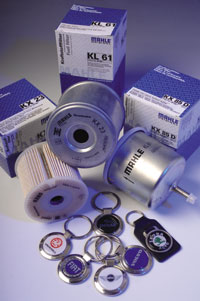 Where reduced engine performance is believed to be caused by filtration, it is usually down to insufficient fuel supply due to use of an incorrect filter, intake of additional air, leaky fuel return pipe or a dirty/clogged fuel filter. It can also be traced to insufficient air flow rate due to dirt in the air filter or a damaged or clogged mass air flow sensor, which controls exhaust gas recirculation and optimises dosing of fuel injection.

When the special filter paper disintegrates, it is often caused by chemicals in the engine oil such as sulphur in poor quality fuel, too high operating temperature, poor engine tuning or a defective cooling system. When using biofuels, MAHLE recommends shortening the time between service interval changes and regularly checking correct function of the thermostat, water pump and radiator.

MAHLE’s advice to technicians
As well as always adhering to the engine manufacturer’s recommended change intervals and only using the correct filters for the specific engine model and specification, advice to workshops in a comprehensive document published by MAHLE Aftermarket is to always tighten the filter by hand – never use a special extraction tool – and always use new seals. If considered necessary, it is advisable to replace the pressure limiting valve of the oil pump at the filter change.