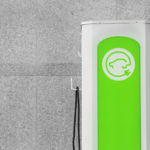 “Is the S-Class Still Top of the Class?”

For more than 40 years now, the phrase ‘S-Class’ has come to represent the peak of the industry, adorning a line of cars that have been recognised as pioneers; whose design, engineering and technology have shone a light on the path for others to follow. In fact, the old adage always was that if you wanted to know what sort of features would be fitted to every car in 10 years’ time, there was only one place to look: the Mercedes-Benz S-Class.

Today, however, that old adage is under siege. Tesla’s recent success with its all- electric Model S means the ‘Big Benz’ is no longer close to being the most forward thinking car on the market; if anything (whisper this quietly) it now looks a little old fashioned compared to that car.

In response to this threat, Mercedes unveiled its aggressive pure-electric car strategy at the recent Paris Motor Show, previewing an all- new, completely scaleable electric platform, which will underpin a ra

nge of cars capable of more than 310 miles between charges, and is due for launch in 2019. With Merc investing around £820 billion in the strategy, it’s clear that the organisation believes electrification will change the shape of the industry.

So where does this leave the S-Class? Well, at one stage during the latest model’s development, there were some mutterings from deep within Stuttgart that suggested Merc would launch it exclusively with petrol- electric drivetrains. That never materialised, but now the company is using the S to take a half-step towards the full-electric future, with the plug-in hybrid S500e.

First launched in 2014, the updated 2017 car sits alongside the smaller C350e and E350e plug-in hybrids, and combines its petrol engine with a welter of lithium-ion battery packs, which can be charged at the mains to boost the electric-only driving range to around 31 miles.

Of course, when the cahrge runs out, the S500e essentially runs like any other hybrid; its 3.0L V6 turbo-petrol engine working in tandem with the electric motor to drive the wheels and act as a generator to sustain battery charge.

The logic behind such technology seems simple enough – in theory, when you top up the S from the mains with max electric-juice, the extra electrons allow the system to achieve official fuel consumption figures around 85mpg – certainly not bad for a 2.2 tonne, 435bhp tank that can out-accelerate a Porsche Boxster.

Clever technology abounds in the S500e too. Four distinct driving modes allow the driver to tailor the behaviour of the hybrid powertrain, depending on how and where the car’s being driven. Of particular note is the E- Save mode, which will preserve full-charge in the battery pack by prioritising the petrol engine. Why? Well, if your daily commute involves a high-speed motorway schlep, and ends with a stop-start crawl through a city centre, E-Save means you won’t use up your precious electrons until you hit the congested urban streets, where silent, emission-free propulsion makes the most sense.

In fact, improving how the driver interacts with the fiendishly complex hybrid powertrain was a real focus for Merc’s designers. Haptic feedback is the branch of interaction design that focusses on giving real, physical feedback through control surfaces to improve the way systems communicate with the user, and it plays a big role in helping drivers of the S to maximise the economy potential of the drivetrain.

Because the main aim of the plug-in hybrid is to run on electric power whenever possible, the accelerator pedal will actually push back against your foot when the car’s on the threshold of engaging the petrol engine – the idea being that if the driver knows the engine is about to kick in, they’ll adjust how they accelerate to keep the car running on electric power. 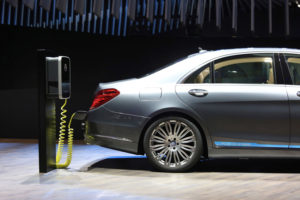 Even cooler, when the S-Class’ forward- facing radar detects traffic slowing up ahead, the pedal will shoot what Merc calls a ‘noticeable double impulse’ through the accelerator, encouraging the driver to ease off the throttle. At the same time, the petrol engine shuts off and the regenerative braking system jumps to its strongest setting, so that when the driver hits the brake pedal, they get max energy regeneration. Expect to see this kind of haptic pedal feedback in future hybrid and full-electric vehicles, as studies have shown that humans really do drive more efficiently with a bit of help from their cars.

GPS also lends a helping hand in the economy game. BMW pioneered GPS-guided transmission control a few years ago, and the S550e goes a few steps further to optimise powertrain performance by ‘predicting’ the road conditions ahead. It knows, for example, when you’re approaching hilly terrain, and if it detects a climb followed by a stretch of downhill running, the powertrain will use more battery power than engine power to reach the top, knowing that the energy will be recaptured by regen-braking on the way down. In other words, this ‘intelligent operating strategy’ is doing all the thinking for you!

Along with the increase in the battery performance, the 2017 update also brings what is arguably the biggest breakthrough for electric vehicles – inductive wireless charging.

Using a floor-mounted primary coil and a secondary coil mounted between the front wheels, the system runs at 3.6kW, and can charge the S’s battery pack overnight without a single cord needing to be plugged in. Much work went into finding the technical ‘sweet spot’ when it came to balancing safe levels of radiation with the higher frequencies required to wirelessly transmit charge to the sizeable batteries used. 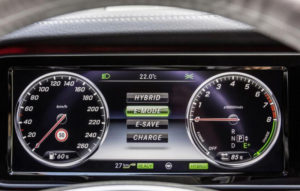 On top of that, the system engineers have created a fully interactive parking guidance system, to ensure the driver can accurately align the car with the pad for max charging power. No doubt we’ll be seeing further developments of this system on future Merc models – be they hybrid or full-electric cars.

From a purely technical standpoint the S500e is a fascinating car. It previews some truly incredible technology; systems like the haptic feedback and wireless charging that will certainly find their way into future electric vehicles. But as a plug-in hybrid is a vehicle that still relies primarily on its petrol engine, one can’t help but feel this is a stepping stone to a future coming very soon. And this is a car that will date very quickly – lighter, more energy dense battery packs are being developed all the time, and full-electric cars are offering greater range and shorter charge times with every new model.

The S500e, then, is one hell of a preview for the future of automotive electrification. The real show, however, looks like it’s just around the corner!

AutoMate is a video training system that utilises the latest and most up-to-date training methods. For further details about the training solutions and range of modules available from AutoMate training, click here.
Tags:AutoMateBatteriesFuture TechnologiesIgnition