This month, Schaeffler REPXPERT Alistair Mason replaced the clutch on a 2003 Mini One, which had covered 103,000 miles. The customer reported that the clutch pedal was heavy when used.

For this repair, you need a two- post vehicle lift, engine support, transmission jack and clutch alignment tool. The scheduled labour time for this replacement is seven hours.

Firstly, ensure you’ve got a locking wheel bolt tool nearby before starting the repair. With the vehicle placed on the ramp, open the bonnet (see below), remove the battery cover, and then disconnect the battery. 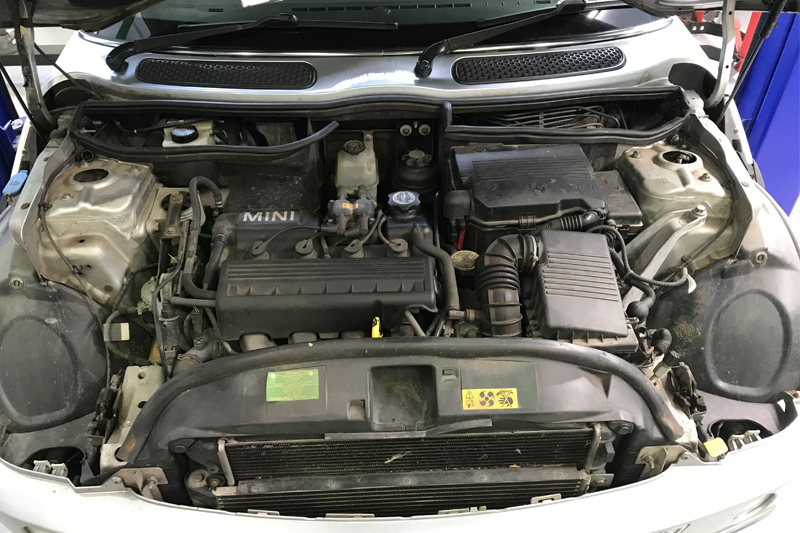 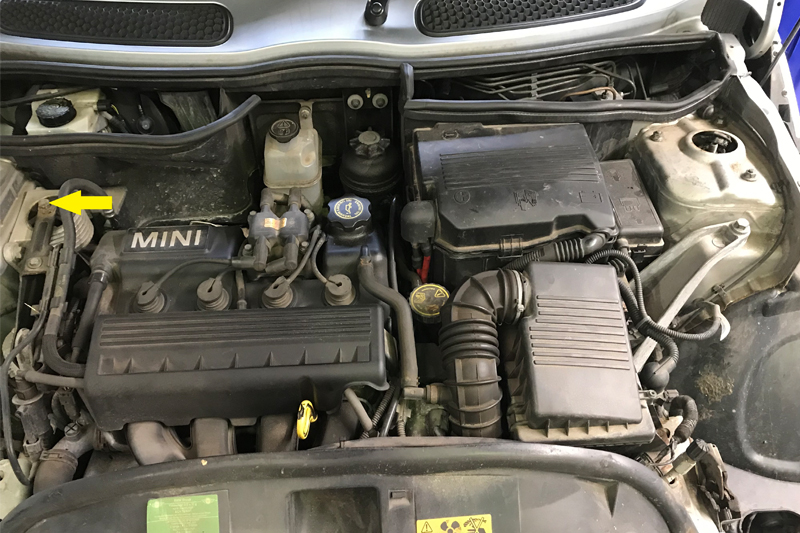 Raise the vehicle lift to gain access to the underside, detach the engine undertray, and then disconnect both bottom ball joints (see below) and the anti-roll bar links, before removing the lower engine torque arm and the subframe retaining bolts. Next, allow the subframe to lower slightly to gain access and undo the four steering rack retaining bolts. Unscrew the power steering motor mounting bolts, too. 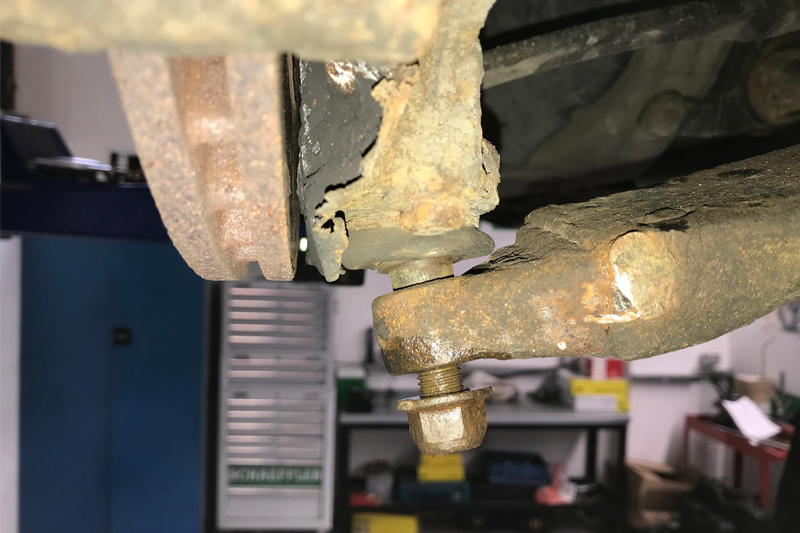 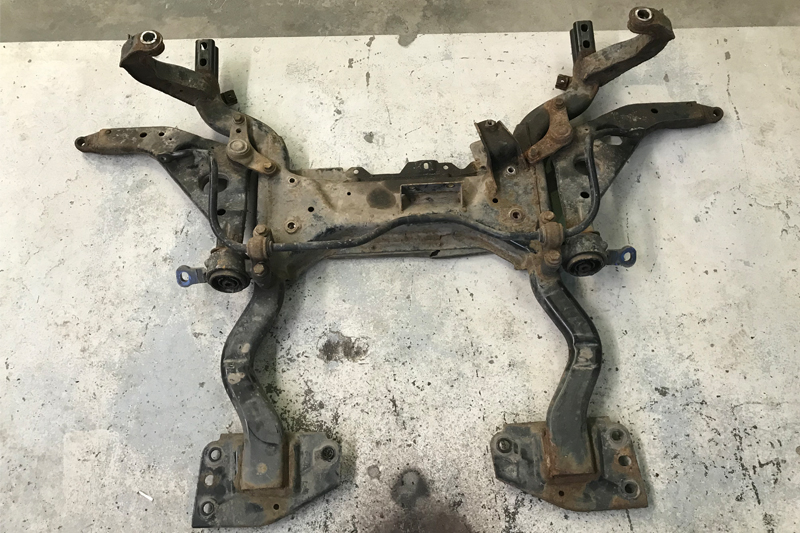 Next, drain the gearbox oil (see below), before refitting the drain plug and torqueing to the manufacturer’s specification. 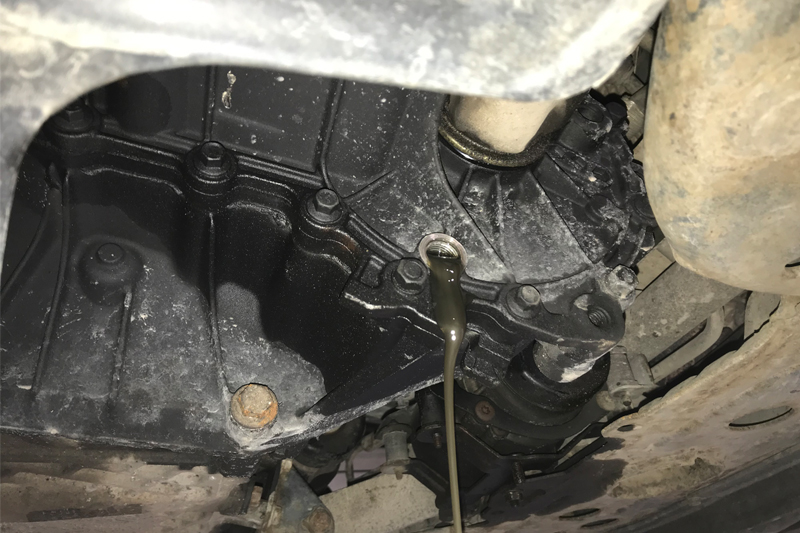 With the subframe removed, the next task is to disconnect the driveshafts: undo the lower bell-housing bolts, leaving in two easily-accessible ones to retain the gearbox until ready to remove. 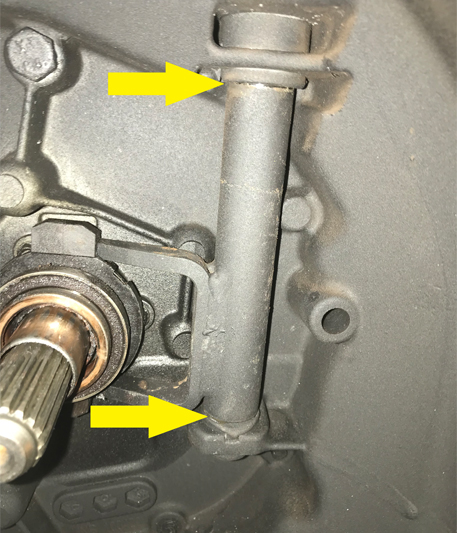 With the clutch removed and the flywheel surface deglazed by an Emory cloth, it was cleaned using brake and clutch dust cleaner. The clutch plate was then mounted onto the gearbox input shaft to ensure correct fitment.

Once located, fit the new clutch using a clutch alignment tool, ensuring the clutch plate is installed correctly with either ‘Gearbox Side’ or ‘Getriebe Seite’ facing the gearbox. Install the bolts and tighten evenly and sequentially, before torqueing to the manufacturer’s specification.

Note: Be careful when trying to remove seized components from the gearbox.

The gearbox castings can be brittle and easily broken, causing an even bigger problem. On this occasion, the centre of the retaining pin was drilled, while the remainder of it was removed with a punch. The release arm lever had corroded and seized onto the clutch release fork; even a two-legged puller failed to separate the two components. At this point, some physics was applied to the job, by expanding and contracting the metal with some heat. The reverse light switch, however, was removed so as not to damage it.

Next, using an oxy-acetylene pack, heat the clutch arm lever and release the fork connection until red hot and quench with cold water. The expansion and contraction will break the corrosion/rust, and then the clutch release arm can be removed by hand.

Disconnect the clutch release fork from the bell housing and inspect for any wear. In this instance, the release arm was serviceable, so just the bushes were replaced.

Finally, fit the new release bearing (see below). Apply a light smear of high-melting point grease to the gearbox input shaft splines and wipe off any excess. 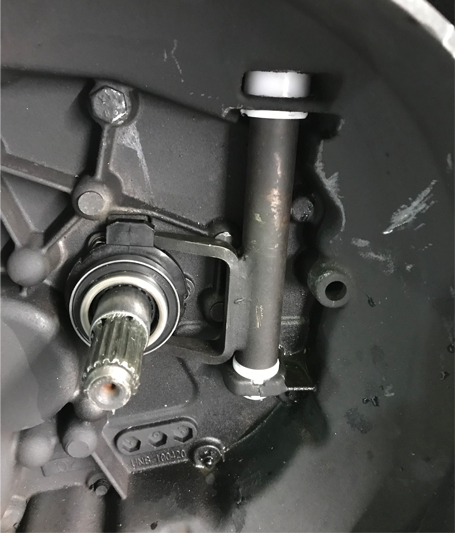 The gearbox is now ready to be fitted; check the two alignment dowels are located correctly in the engine, and, using the transmission jack to refit the gearbox, ease into position and locate on the engine dowels. Once located, secure in position with a couple of bell housing bolts.

Reinstall all items in reverse order of removal, refill the gearbox with the correct quality and quantity of gearbox oil, and torque all bolts to the manufacturer’s specification. Once the battery has been reconnected, reset all electrical consumers as required. Finally, road test the vehicle to ensure a quality repair.