Most issues in relation to spark plugs are invariably down to a plug being affected by either an engine running or set up problem or something that has gone awry upon installation. The common ‘misfire’ complaint in connection with spark plugs is first tackled by plug removal and examination. Plug fouling can cause a misfire. This can be, for example, in the form of excessive carbon build up caused by an engine running in a rich condition, coated with oil due to an engine condition issue. Fouling will not be the fault of the plug itself provided the correct plug for the engine is installed.

Closely inspect the plug insulator for cracks, which will cause a misfire due to the voltage no longer being contained. A crack to the top portion of the insulator is caused by either over tightening or the plug being tightened with the wrench canted out of line. This puts pressure on the top of the plug. A crack in the insulator on the firing end is usually caused by ‘thermal shock’, the result of neat or poorly atomised fuel hitting the hot insulator surface causing it to cool rapidly.

Black vertical electrical lines on the white insulator surface (sometimes mistaken for cracks) are a sign of ‘flashover’. They can occur between the top terminal and the metal shell body. These are the result of a worn or deteriorated plug rubber sealing boot on the lead or ignition coil. Replacement of the plug alone may not cure unless the connection on to the plug is secure and the seal over the insulator is tight. 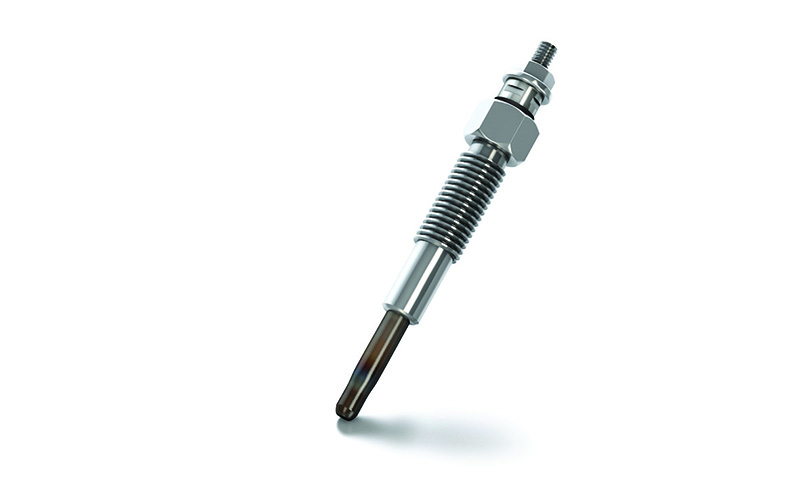 A broken plug metal shell is the result of over tightening. This occurs at the top of the thread or just above. There is no requirement to use any anti-seize grease on NGK spark plugs. Use either the vehicle manufacturers or NGK’s recommended torque. If the threads are not dry or an anti-seize grease has been applied, then do not torque, but use the tightening angle advice displayed on NGK spark plug packaging. Torque and tightening angle advice varies depending on the plug thread size, sealing method (taper or gasket seal) and varies between gasket material and construction types.

Plugs can be tested in situ if access allows. Heating coil resistance can be checked with a meter by first removing the lead from the top terminal. Check the resistance between the top terminal of a glow plug and the cylinder head. Individual part numbers have individual manufacturing target resistance values. However, general rule for metal type glow plugs is a reading less than 5 Ohms indicates the glow plug is in serviceable condition. No reading indicates that there is a break in the heater coil. This could be due to natural degradation over the service life of the plug but could be caused by some other factor such as excessive voltage being applied.

Upon glow plug removal, look at the heater tube surface. Any scuffs or ‘swirl marks’ over the surface is an indication that the glow plug has been caked in carbon build up. This can cause a glow plug to fail prematurely and can cause a replacement plug to become damaged if not rectified. Excess carbon should be removed from the glow plug hole using a proprietary glow plug reamer kit.

Various fault codes exist that indicate an issue with the heater circuit. Individual sensors have their manufacturing target resistance values for their internal heater. The heater circuit within the sensor can be tested with the sensor in situ if access permits. After disconnection from the vehicle loom, inspect the inside of the connector very closely for any contamination. It should be bone dry with no oily residue apparent (which can affect the sensor connections and operation). A resistance reading should be taken between the two heater wires (most often two white wires on 4-wire zirconia sensors or white and grey on 5-wire wideband sensors – but both types can vary) should be taken and compared to the vehicle or component manufactures specification. If within tolerance, then the rest of the lambda heater circuit (vehicle-side) should be investigated.

Want to know more? Technical know-how videos and technical tips can be found I the TechniWiki section of the NGK website. For more information, click here.
Tags:NGKTech Tips