Graeme Ryder, from the Apec TECHMATE team, lifts the lid on ABS sensors.

An anti-lock braking system (ABS) is a vehicle safety system that allows the wheels of a car to maintain tractive contact with the road surface while braking, preventing the wheels from locking up (ceasing rotation) and avoiding uncontrolled skidding. It is an automated system that uses the principles of cadence braking.

The ABS system does this at a much faster rate and with better control than many drivers could manage. ABS generally offers improved vehicle control and decreases stopping distances on dry and slippery surfaces. However, on loose gravel, ice or snow-covered surfaces, ABS can increase braking distance, although still improving vehicle steering control.

The ABS, or wheel speed sensor is a relatively simple – yet vitally important – part of the ABS system as it is used to communicate the rotational speed of the wheel to the ABS control module. Wheel speed sensors are installed directly above or next to the pulse wheel. These are also known as a tone wheel, but more often than not, referred to as the ABS ring. The ring is attached to a part of the vehicle that is rotating at the same speed as the road wheel, such as the wheel hub, brake disc, CV joint or the drive shaft.

These comprise a wire coil wound around a magnetic core and a permanent magnet. The pole pin inside the coil is connected to the magnet and the magnetic field extends to the ABS ring. The rotational movement of the ABS ring and the associated alternation of teeth and gaps effects a change in the magnetic flux through the pulse wheel and the coil.

The changing magnetic field induces an alternating voltage in the coil that can be measured. The frequencies and amplitudes of the alternating voltage are related to the wheel speed. The sensor creates an AC signal that changes frequency as the wheel changes speed. The ABS control unit converts the AC signal to a digital signal for interpretation.

Structure of a passive sensor

Output wave of a Passive sensor

Passive sensors are larger and less accurate than active sensors and only start to operate when the wheel reaches a certain speed. Therefore, they have limited operation at lower speed. They are also unable to operate in reverse, and thus are unable to determine the direction of travel.

Active sensors, on the other hand, are a lot more accurate and are able to detect speeds of less than 0.06mph. This is vital for modern traction control systems. Some active sensors can even detect the rotational direction of the wheels. Active sensors require an external power source to operate and work in conjunction with a toothed or magnetic ABS ring. Active sensors create a digital signal which is transmitted to the control unit in the form of a current signal using pulse width modulation.

Structure of an Active sensor 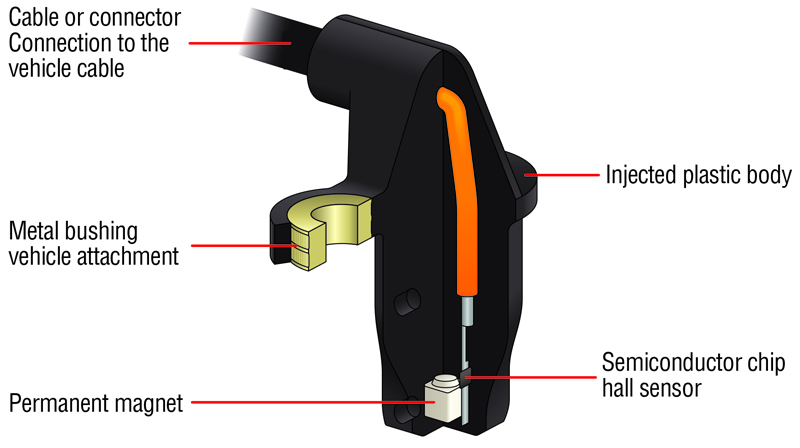 There are two types of Active sensor: The Hall sensor and the Magneto-resistive sensor.

The Hall sensor uses the Hall effect, which is a generation of a voltage (the Hall voltage) across an electrical conductor, transverse to an electric current in the conductor and a magnetic field perpendicular to the current. They react to changes in magnetic fields with a voltage difference which is sent to the ABS control unit as a square wave signal. They use a semiconductor sensor coupled to an electronic circuit, protecting the sensor from possible voltage spikes, and a permanent magnet.

Output wave of an active sensor

Hall sensors record the wheel speed via either a toothed or magnetic encoder (ABS ring) often found on the wheel hub, disc or bearing. The sensors are very accurate, but must be installed with precision.

The advantage of using a magnetic ring over a toothed ring is that the sensor can be a lot smaller as there is no permanent magnet required in the sensor. It is instead located in the virtually flat ‘ABS ring.’

That magnetic ring can be located in the wheel bearing, allowing them to be used in confined spaces. The variation in the magnetic field is now created by the sections of polarity within the ring.

It is this that enables the control unit to determine the wheel’s rotational direction. Magneto-resistive sensors are much more

precise, but generally more expensive than Hall sensors and require a less precise installation position, therefore meaning that it can be located further away from the ‘ABS ring’ than the other types of sensors.

Both Active sensors are less sensitive to electromagnetic interference, vibration and temperature fluctuations than a Passive sensor.

Generally speaking, ABS sensors are very reliable. However, due to their location, they have a tough life.

If any of the warning lights above are illuminated, or there is brake pedal judder while braking at low speeds, or the wheels lock up while braking, then there is probably a fault somewhere within the ABS system.

One of the most common calls that we currently receive in our technical department is for the Peugeot 308 rear. This particular brake disc also contains the bearing and ABS ring. The workshop replaces the disc, only to find that the ABS sensor is now in contact with the ABS ring of the new disc. Apec or the motor factor usually get the blame for an incorrect part, but we know that Apec parts are made to the exact dimensions as the original disc, so it is unlikely to be the disc that is at fault.

What actually happens is that, over time, corrosion forms and builds up under the mounting point of the ABS sensor. This forces the sensor towards the ABS ring and begins to wear the surface of the ABS ring. If this is noticed before the disc is bolted up, then usually the sensor (if not too worn itself) can be unbolted and the corrosion removed. However, if it is not noticed then it can result in the ABS sensor snapping as the vehicle is driven out of the workshop.