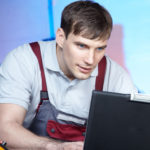 Joshua Jones, a Devon-based Garage Manager for the AA, explains why a knowledge-based approach to vehicle troubleshooting can help to eliminate much of the guesswork that so often leads to expensive mistakes.

I find it absolutely fascinating to look at the different ways that we, as technicians, go about handling the task of tracing a vehicle fault to its origin. I guess there are as many different avenues to take on the road to diagnosis as there are automotive engineers – even when most of us were trained in largely the same way initially.

One thing I’m particularly interested in is how we choose to maintain and grow our knowledge base and hone our approach to rectifying vehicle faults quickly and efficiently – something we all need to do in order to stay employed or be financially stable within this industry.

I’ve learned during my career that my skills as someone that can answer a vehicle problem enquiry – either physically or verbally – is basically what earns me money and creates demand for my employment. Granted, there are other experience-based skills attached, such as good customer interfacing skills, strong sales techniques, being approachable etc., but there are a lot of people out there with these abilities. What sets us apart, I believe, is our ability to solve automotive problems for people.

“Building confidence in our knowledge of vehicle systems is absolutely paramount if we’re to remain valuable as professionals.”

The majority of my career has been spent with the pavement, a driveway or the hard shoulder as my workshop. For anyone that has spent time trying to find that dodgy relay, or figure out which coil it is, you’ll know the extra strain it can place on your brain whilst thinking about something that most people would describe as fairly complex. In my job there is also nearly always the next customer waiting for your assistance, so on top of the aforementioned surroundings, there is the unstoppable force that is time.

It is these things that have made me realise just how important it is to have a good idea of how you will attack a tricky question before you start to try and find the answer. In a technological world that is evolving at a petrifying pace, building confidence in our knowledge of vehicle systems is absolutely paramount if we’re to remain valuable as professionals.

I’ve always felt the want to know more about the way cars work and learning about them has been an enjoyable and exciting journey, as opposed to being something I just do to pay the bills. This approach has stood me in good stead financially and, as importantly, morally. I enjoy what I do!

“Building confidence in our knowledge of vehicle systems is absolutely paramount if we’re to remain valuable as professionals.”

So where am I going with all of this? Well, while observing different approaches that we have, it’s clear that some people struggle more than others when it comes to diagnosis of faults, with some technicians frustrated by the feeling of ‘drawing a blank’ and not necessarily knowing the thing to test, or replace, next.

When we struggle, it’s often easier to shy away or, even worse, guess at the cause of the fault. Having been in this situation a lot in my early twenties, it drove me to establish a knowledge base of vehicle systems that has allowed me to feel confident in finding a component to be faulty (or not) and being assured enough to rule it out as a cause. I’ll then move on, getting closer to the cause systematically.

From my experience there seems to be two main ways that technicians diagnose cars: the knowledge based approach and the memory based approach.

The memory-based approach is one where you’ll often hear comments like: “the airflow meters always go on these, so it’s probably that” or “this model was always a nightmare for those failing”. Don’t get me wrong, common fault databases and past experiences both play a vital part, but what if you’re the first technician to experience that particular airflow meter fault or the fault is too new to be on the ‘probable faults’ list? It’s at this point that some technicians will carry on investigating, while others will change a part and hope it’s the right choice – for them and their customers’ sake.

For those of us that carry on investigating, I believe we use the knowledge-based approach, which requires the basic understanding of the system we’re testing. A good example of this approach is when you’re asked to investigate a fault on a car with rough running symptoms and an illuminated EML. You give the car a visual inspection under the bonnet and check the oil to make sure that nothing blindingly obvious has occurred. Then you reach for the scan tool and interrogate the engine control unit for DTCs where you might find a code in the system: ‘Manifold pressure sensor signal implausible’. At this point the two different approaches – or ‘powertrains of thought’ – can potentially come in to play.

If you use the memory-based approach you could check your own head to see if you’ve experienced this problem before and try to recall what the cure was. Alternatively you could check your computer to see if there is a technical bulletin that relates to this DTC. But let’s say there are no related bulletins and you don’t recall seeing this problem before, what do you do next? Replace the MAP sensor? It’s the most likely outcome, right?

The knowledge-based approach at this point would take a different path, as the technician carrying out this example task would immediately ask him/herself: “What could cause this fault code to be triggered?” Our knowledge would tell us straight away that there is a list of different explanations for this DTC being triggered and we have to tick them off one-by-one as not being the cause. I normally describe this as “find what it’s not and you’ll arrive at what it is”.

We can create this list in our heads by simply understanding the principles in which a MAP sensor works: a piezo crystal inside it is used to change a voltage output based on the atmospheric pressure it is placed in. The control unit uses this varying output to know how much pressure is present in the intake system of the engine.

If we, in turn, have basic knowledge of the other components of the powertrain in exactly the same way, we can conjure an image in our brains of how a fault with one component can cause a knock-on effect to another, thus triggering a DTC. For instance we now know the basic way in which a MAP sensor operates, and if we also know that a throttle flap on a diesel engine is primarily intended to reduce pressure in an intake system during engine shutdown in an effort to enhance smoothness, as the engine comes to a halt, we could put two and two together and assume that if a throttle flap were to even partially close at the wrong time, perhaps with the engine idling, then this could make the “MAP sensor signal implausible”.

Moving on from this, if we knew the way in which a throttle flap is operated generally on most vehicles, then we could test it and eradicate it as a cause of our fault. If we keep doing this with all the other related components that could’ve caused our trouble code, we nearly always arrive at the culprit. THIS is a knowledge based approach!

My advice to those that want to improve their knowledge is that if you can digest one piece of information a week on how car parts work, within a short space of time you’ll feel much more confident to tackle problems as you’ll feel empowered to investigate systematically. It may have escaped your notice that not once during my explanation of this way of doing things did I mention a specific brand or model of vehicle, that is because one car and the next are like us and apes: 99% genetically the same!

A MAP sensor on a Micra works in a very similar way to the ones used on a McLaren; if you know the way it works on a Micra then you know how it works on a McLaren, so you can test away knowing what you’re looking for. I believe that by conducting ourselves this way we can cut out a huge amount of ‘guess work’ and increase revenue by feeling confident about charging for our time.

So, if you’re already using the knowledge- based approach then I salute you. If you prefer to take the memory-based route then why not attempt to digest some extra knowledge? It’s so readily available these days, through the internet, training courses and magazines (like PMM) that update us on the way things work, so we can use them to decide if a component requires repair or replacement.

The journey may have just started for you, but it’s one that I hope you’ll find as exciting as I have!

0 0
Previous : Why was the Volvo Vexed?
Next : Common Causes of Clutch Failure and Replacement Tips