For this edition of PMM’s Belt Focus, the team at Dayco runs through how to install a timing belt on a 2007-11 VW Tiguan 2L TDI 4MOTION.

The 2L TDI diesel engine used in the popular VW Tiguan features a timing belt driven water pump. As replacing the belt also requires the auxiliary drive system to be removed, Dayco recommends that all the systems’ components – primary drive and auxiliary drive – be replaced at the same time.

This step-by-step technical guide will help technicians through the process, to avoid complications and ensure a first-rate job.

As with all primary drive system jobs, the work should be undertaken when the engine is cold, so ideally the vehicle will not have been run for at least four hours.

After removing the bracket and disconnecting the coolant temperature sensor, take off the upper timing belt cover and then the mudguard moulding under the right-hand wheel arch to allow access to the auxiliary drive system. Then, after correctly supporting the engine, remove the upper-right engine mount and the support bracket followed by the auxiliary belt and tensioner.

Once the remaining timing belt cover and coolant pipe support have been removed, rotate the crankshaft clockwise to TDC for cylinder one to match the timing reference marks on the pulley and lock the pulley in place using Dayco tool T10050 (Fig 1). 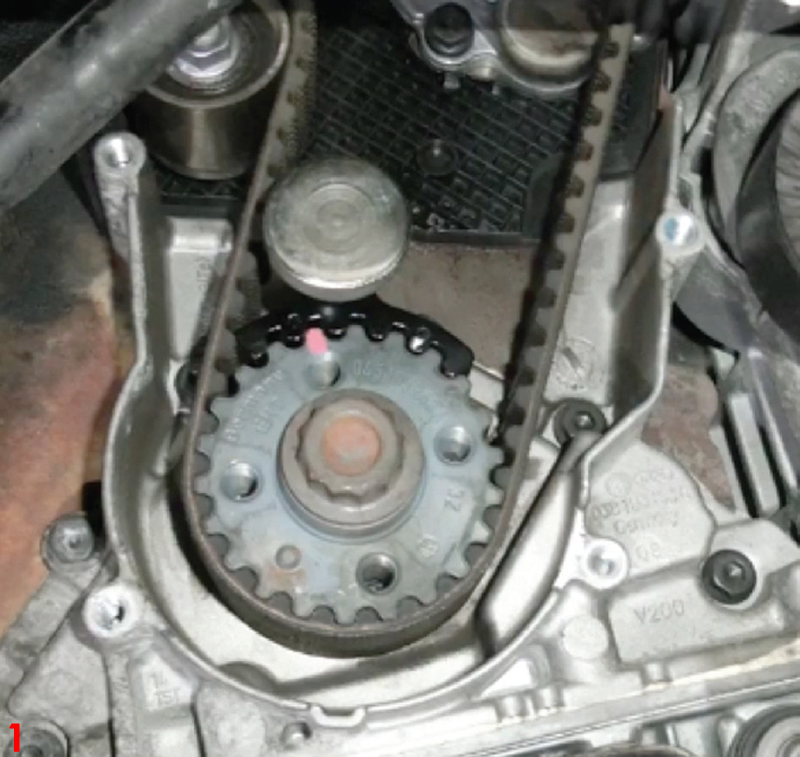 Install the new belt tensioner and nut, but make sure that the tooth is inserted into the slot in the housing as shown (Fig 2). Then, after rotating both the camshaft and fuel injection pump pulleys clockwise, install the HT (High Tenacity) timing belt, followed by the replacement top idler and bolt from the kit. 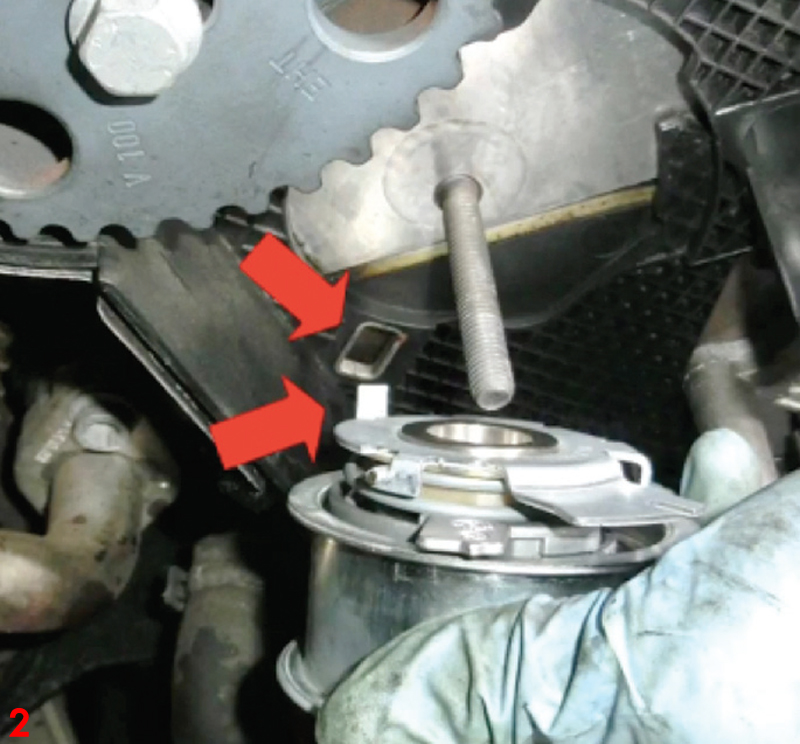 Next, rotate the belt tensioner with its position index inside the space in the back plate as shown (Fig 3) and tighten to 20Nm + 45. 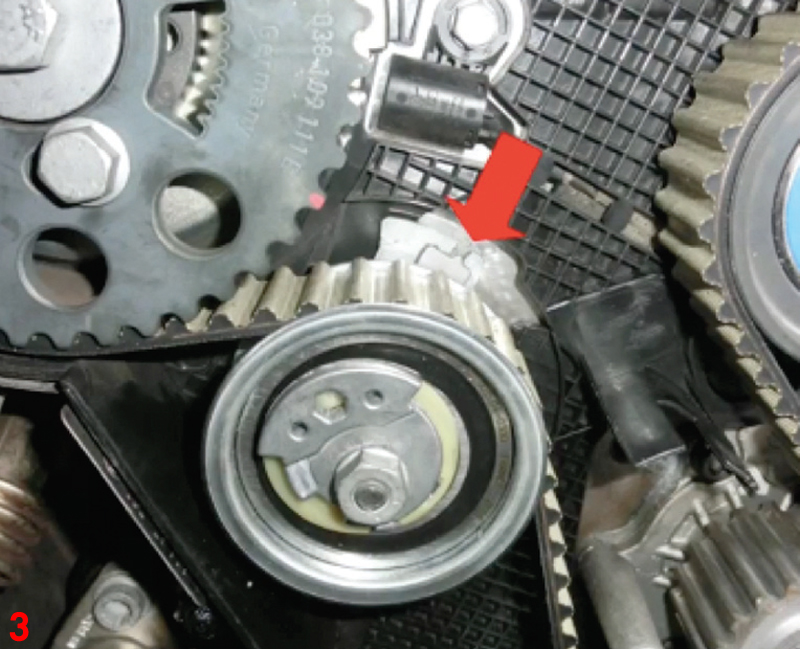 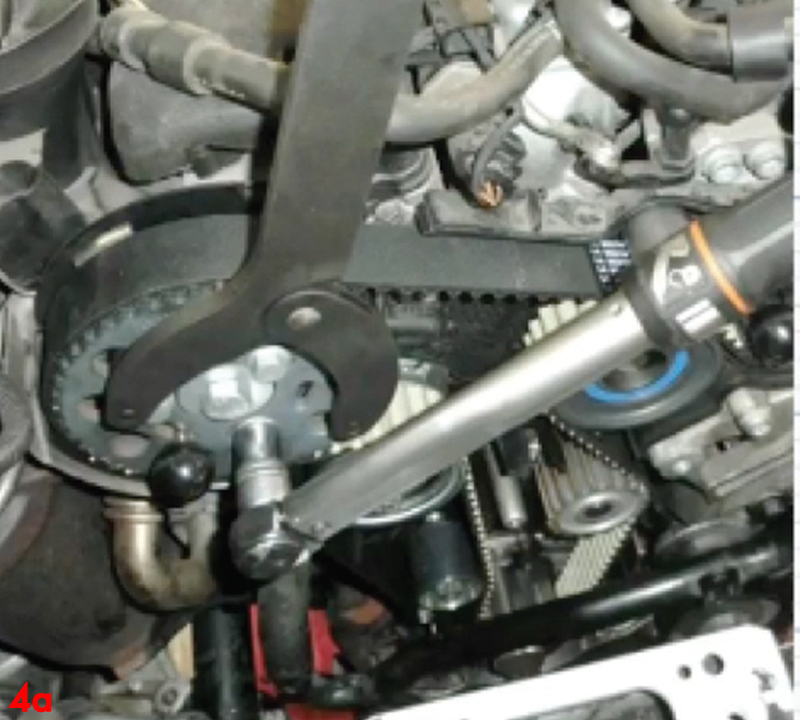 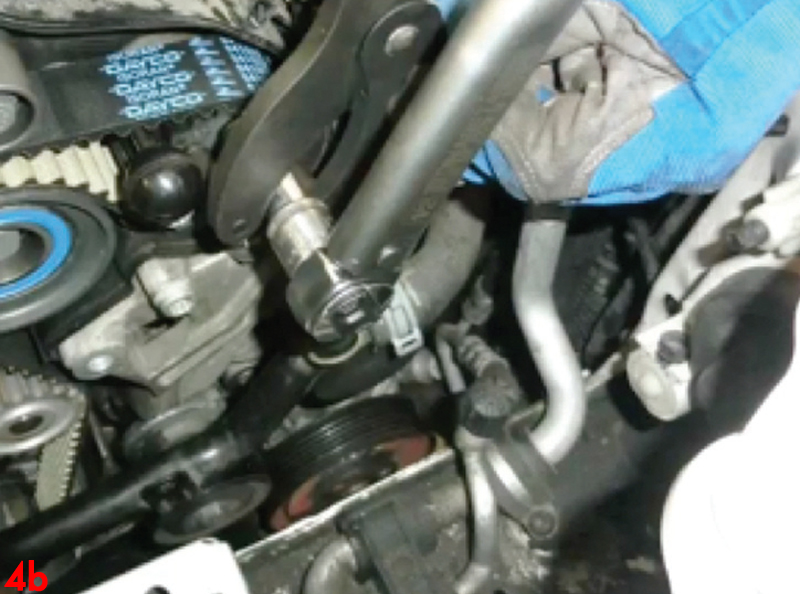 Remove all the timing tools and rotate the engine clockwise several turns to ensure that it is correctly timed and that the belt tensioner index is still in the space of the backing plate as shown previously.

Remove the alternator pulley bolt and replace the pulley with Dayco ALP2395.

Using a 13mm ball-end Allen key, remove the bolt at the back of the auxiliary belt tensioner located under the rear side of the alternator and replace the tensioner with APV2511.

After replacing the timing belt covers and other previously removed components, replace the crankshaft pulley with DPV1123 and tighten the bolts to 10Nm + 90. Finally, replace the auxiliary belt with 6PK1070.

To finish, refill the cooling system, start the engine and carefully check for leaks and ensure the radiator fan is operating correctly. Then, once the engine is cold, check the level of the fluid again.