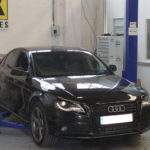 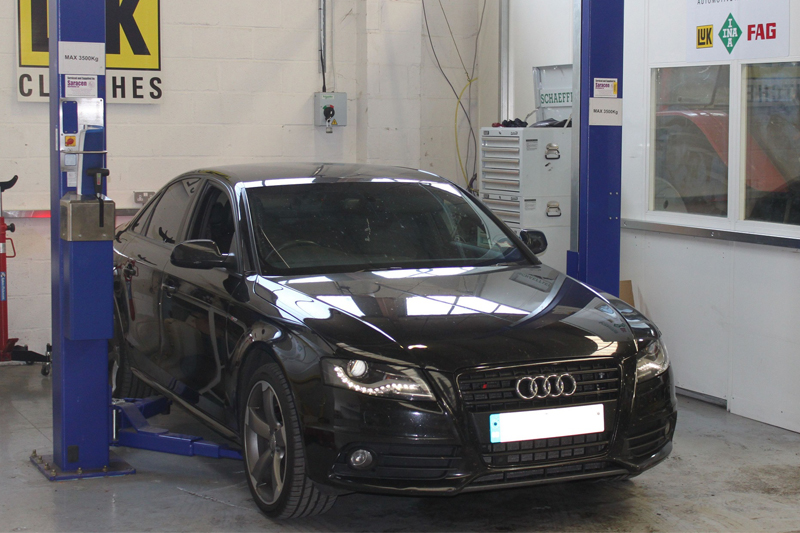 How to Fit a Clutch on an Audi A4

Audi released the 8K chassis A4 in 2007. Included in this model were some changes to the clutch and transmission system with the wheel base increased, but not the overall length of the car. 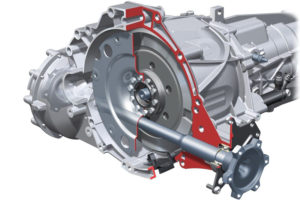 The new configuration Audi – called Modular Longitudinal Platform (MLP) – is used on all current Audis with a longitudinal engine and gearbox configuration. On initial inspection, a clutch replacement can look like a complicated repair, but with a little know- how this will prove to be an ideal job for any independent garage.

The customer’s concern was that the clutch pedal’s biting point was very high. After a short test confirmed this a clutch replacement was advised and the customer also requested that the dual mass flywheel (DMF) was replaced. The workshop equipment required for the repair is a two-post ramp, transmission jack and a universal clutch alignment tool.

With the vehicle placed on the ramp, disconnect the battery located in the boot under the spare wheel – don’t close the boot, however, as this has an electric release system. You should also make sure the steering lock has actuated as you have to disconnect the steering column before raising the vehicle and removing the engine and gearbox undertrays (see below). 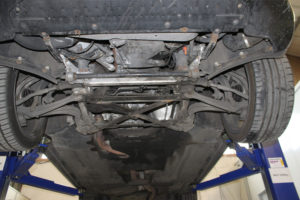 Remove the transmission tunnel bracing frame, taking care to disconnect the pipe bracket and heat shield, then remove the pinch bolt from the steering column universal joint/steering rack, the exhaust front pipe bracket and also the small o/s heat shield that is fixed to the chassis leg and front sub-frame. 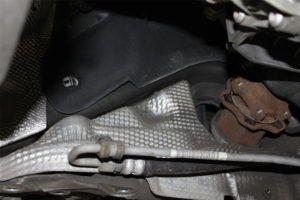 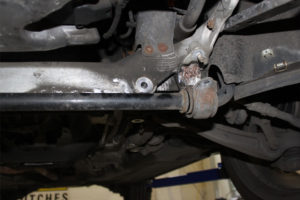 Remove the two bolts that mount the steering rack to the front sub-frame, ease the steering rack from the sub-frame and allow it to hang – this gives you access to the starter motor bolts. Slacken the exhaust sleeve that connects the intermediate pipe to the rear exhaust section and part the exhaust, allowing the intermediate section to hang down. Support the back of the gearbox with a transmission jack and remove the rear gearbox mounting. Now remove the clutch slave cylinder bolt and ease out the slave cylinder before stowing.

Remove the black plastic blanking plate located at the bottom of the bell housing to gain access and then remove the three flywheel-to-drive-plate bolts (see below). 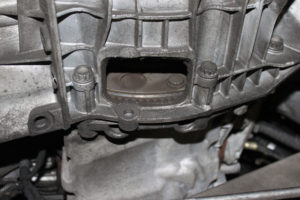 Start to remove the bell housing bolts, leaving a couple of accessible bolts until the gearbox is supported and ready for removal; good practice is to store the bolts in the position/pattern of removal.

The bell housing bolts have a twice torque life so always mark the heads of the bolts with a centre punch to indicate that they’ve been torqued for a second time and will require replacement if removed again. Also note that the top starter motor bolt has a spacer located between the bell housing and the starter motor.

Position the gearbox jack ready for gearbox removal, and secure the gearbox to the transmission jack (see below). 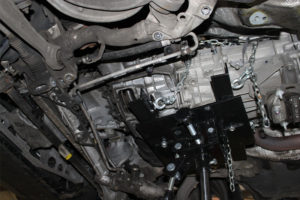 Now remove the final bell housing bolts and ease the gearbox back. When the gearbox is free from the engine remove the flange shaft from the gearbox by sliding it out between the chassis leg and front sub-frame towards the n/s wheel. Remove the driveshaft and store.

Carefully remove the gearbox from the vehicle and lower. Now take the black handle tool in the clutch kit and secure it to the flywheel (see below) before carefully removing the heavy flywheel and clutch assembly. The release bearing, arm and sleeve can now also be removed. Check for any wear on the release arm pivot points and replace if required. 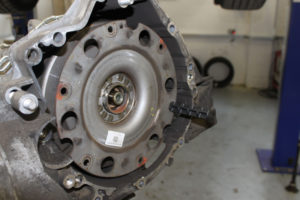 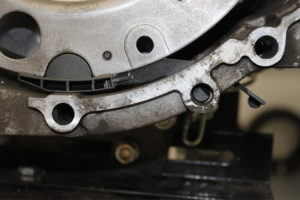 Check that the dowels are still located in the engine and then install the gearbox, remembering to insert the flange shaft before locating the gearbox on the engine. With the gearbox and flywheel located, remove the clutch/flywheel support tool, refit the accessible bell housing bolts and tighten. The transmission jack can be removed and used to support the rear of the gearbox and the remaining bell housing bolts installed. Rotate the flywheel to align the flywheel to the drive plate holes, insert the new bolts supplied and tighten/torque. Refit all other items in reverse order of removal.