Gerhard Steiger, President of the Bosch Chassis Systems Control Division, charts the development of a now integral part of a vehicle’s safety system.

The end of 2015 will see an EU adoption of the electronic stability program (ESP) as a universal standard. As of November 1st last year, newly registered passenger cars and light commercial vehicles with a gross vehicle weight of up to 3.5 tonnes have to be equipped with the ESP anti-skid system. The regulation will then take effect for all other vehicles one year later.

In 2011, ESP prevented more than 33,000 accidents involving injury and saved more than 1,000 lives in the EU member states (of which there were 25 at the time), even though the system was only installed in an estimated 40% of vehicles. An accident research study by Bosch confirms its effectiveness. After the seat belt, ESP is the most important vehicle safety system; even more so than the airbag. Bosch has manufactured 100 million ESP systems since series production began in 1995. 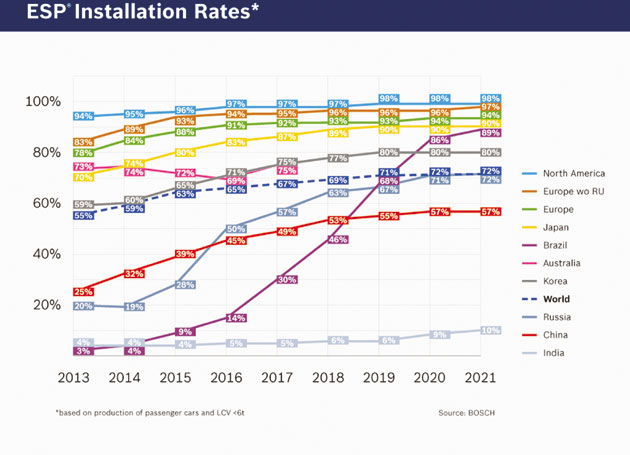 How does it work?
Swerving on dry, wet, muddy, or slippery roads often results in severe traffic accidents. Using smart sensors 25 times per second, ESP compares whether the car is actually moving in the direction in which the driver is steering it. If the measured values do not match, the anti-skid system intervenes and first reduces engine torque. If that is not sufficient, it additionally brakes individual wheels, generating the counterforce needed to keep a vehicle on course.

ESP is the logical next step in the further development of the ABS antilock braking system, created by Bosch in 1978. Today, it is much more than a mere anti-skid system. A number of value-added functions now account for most of its performance, including the ability of ESP to prevent a vehicle from rolling backwards during hill starts. It is also able to stabilise swerving trailers and to reduce the rollover risk of sports utility and light commercial vehicles. 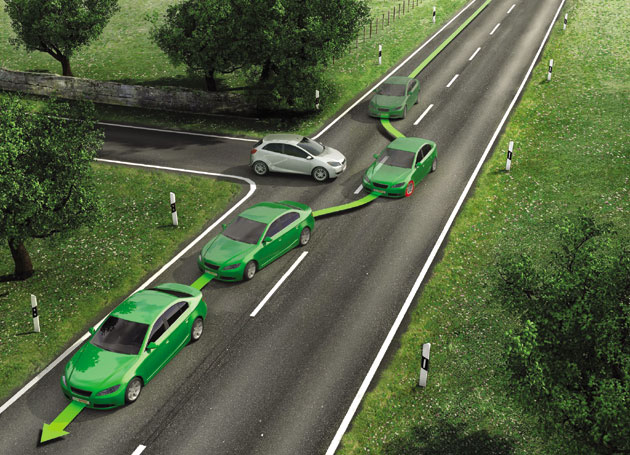 Driving assistance
The electronic stability program also plays a key role when it comes to many driver assistance systems and automated driving, which is why its development is always ongoing. With its customised solutions, Bosch supports the worldwide efforts of manufacturers and governments to make active safety systems standard equipment in every vehicle.

PREVENTION
Since being launched in 1995, ESP has prevented 190,000 accidents and saved more than 6,000 lives across Europe.

NO SKIDDING
According to independent studies, up to 80% of skidding accidents on the road could be prevented if all vehicles were equipped with an anti-skid system.

WATCH IT
Want to see how ESP works with your own eyes? View the animated video: