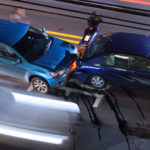 Brake fade is an avoidable, dangerous hazard. PMM speaks to Delphi Technologies to find out what it is, what causes it, and how to reduce the risk of it happening.

Despite the common misconception, brake fade isn’t only experienced on high performance track and race cars. The phenomenon manifests as a temporary and sudden reduction in braking power, caused by excessive heat in the system from braking repeatedly, under high loads or at high speeds. Unlike brake failure caused by a mechanical or hydraulic fault, the system is normally in good working order, and brake power will return, albeit not necessarily to the same level, once the issue has been addressed. 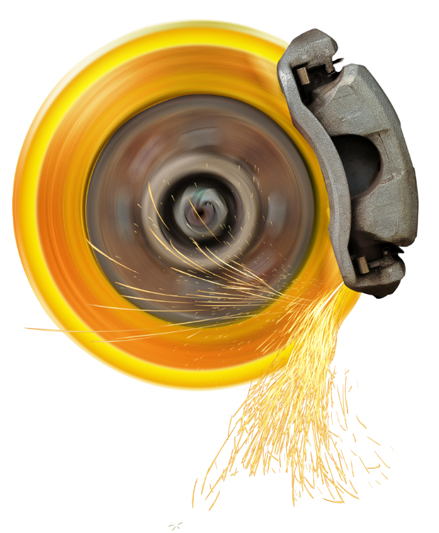 The most common cause is excess heat. In short, brakes function by converting kinetic energy into heat. Every time the brakes are applied, the system generates heat, which under normal driving conditions will
dissipate into the atmosphere and other components. However, since kinetic energy rises with the square of velocity, braking from higher speeds or under load puts an exponentially increased demand on the system, generating significantly more heat which can build-up in the system, causing brake fade.

To avoid generalisation, there are three main types of brake fade: pad, early life and fluid. Pad fade is caused by the components working outside of their maximum temperature range. The friction material degrades, causing the resins that bind the pad compounds to out-gas and depositing a thin layer of high-temperature gas between the pad and disc. This film significantly reduces friction as the pad cannot effectively grip the disc. In these conditions, pads can also deposit a thin, uneven layer of friction material onto the disc’s surface, which can lead to irregular heat build-up and compromised performance.

Early life, or green fade as it’s also known, is caused by the release of gas as new pads reach high temperature for the first time. This is generally avoided by bringing the pads up to temperature in a controlled environment post-fitment, more commonly known as the bedding-in process.

Brake fluid fade is the result of old, boiled or contaminated fluid. If brake fluid boils from prolonged or heavy braking, any moisture in it will also boil and turn to vapour. Since vapour is easier to compress than liquid, the brake pedal will eventually travel all the way to the floor, resulting in reduced braking power or temporary failure. Pumping the brake pedal can help resolve the situation. Over time, brake fluid absorbs water and as the moisture content of the fluid increases, the point at which it boils decreases, making the risk of brake fluid fade greater. This is why brake fluid has a designated service interval. If your customer has experienced fluid brake fade you’ll need to bleed flush through the brake fluid from the calipers until you get clear brake fluid.

Prevention is the best cure

For high performance or heavily loaded vehicles, it is critical to fit components that are engineered to handle the additional braking requirement. Take Delphi Technologies’ brake pads as an example. With a precise formulation developed from a choice of over 130 ingredients, the friction material is developed to ideally suit the designated vehicle’s requirements. The company’s brake discs also feature proven cooling technologies, such as directional vents and cross drilled holes to improve both cooling capacity and resistance to thermal shock.

Delphi argues that technicians should always perform a full road test in a safe environment to properly bed in new components, with 10 repeated stops at 60% braking effort, from 60 to 20mph. During this procedure, extreme braking should be avoided, as should activation of the ABS system. Your foot, says the company, should never be left on the brake pedal to avoid stopping fully. Finally, customer education can be a vital tool for avoiding brake fade, reducing component wear and even saving money. For example:

■ Don’t ride the brakes as this can overheat the system.

■ Anticipate the need to slow down by thinking ahead.

■ On downhill descents, especially if towing, change into a lower gear and make use of engine braking instead.

■ Replace brake fluid as per the vehicle manufacturer’s recommendation.

■ Remember to bed in your pads if your garage hasn’t already done this.

Brake fade is an unwelcome characteristic, but one that can be protected against, and prevention is the best cure. By fitting high quality components and following simple bedding in procedures, technicians can eliminate the key risk factors and be confident of a happy and satisfied customer base.