Cooled exhaust gas recirculation (EGR) can play a significant role in this process. Thanks to such cooling, the combustion chamber temperatures are lower, as is the level of nitrogen oxide formation. Based on years of experience in the development and manufacture of EGR systems, Pierburg has designed a whole range of EGR cooler modules to permit the precise cooling of exhaust gases. 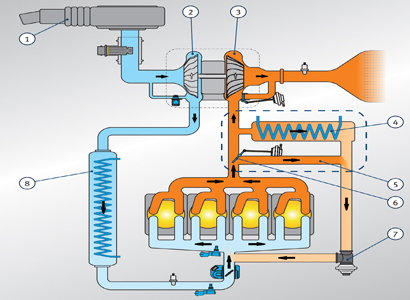 Many of today’s EGR coolers feature an electrically or pneumatically switched bypass flap. This flap allows the exhaust gases to be routed past the EGR cooler in the warm-up phase so that the engine and catalytic converter achieve their operating temperature more quickly.

A further advantage is a reduction in noise generation (‘diesel knock’) as well as in the level of raw hydrocarbon emissions in the warm-up phase. Bypassing is also possible if high exhaust gas temperatures are required, for example for the regeneration of diesel particulate filters.

With gases there is a close relationship between pressure, temperature and volume. In simplified terms:
■ Heating a certain volume of gas causes it to expand; the volume decreases as the gas cools down.
■ If the volume is restricted, as is the case for example in a cylinder, the pressure increases with increasing temperature and drops on cooling.

In other words, given a fixed volume, it is possible to “get more gas in” by cooling it. Consequently the greater the amount of exhaust gas in the cylinder charge, the lower the oxygen content. The exhaust gas itself is not involved in the combustion process, but can absorb large quantities of heat thanks to its high thermal capacity. These two effects lower the peak combustion temperatures and reduce the combustion rate and hence also nitrogen oxide emissions.

The term ‘nitrogen oxides’ is an umbrella term for the gaseous oxides of nitrogen. Use is made of the abbreviation NOx, as there are several compounds of nitrogen and oxygen on account of the numerous oxidation stages of nitrogen. Nitrogen oxides irritate and harm the respiratory organs, contribute towards smog and ozone formation and promote the development of acid rain.