Premier Diagnostics, a specialist in emissions testing equipment, highlights the current problems surrounding the DPF, and the steps the industry needs to take in order to reduce airborne particulate matter generated from in-service diesel vehicle emissions.

The Diesel Particulate Filter (DPF) was mandated by Euro standards from Euro 5, or 2009, onwards for a very good reason: to filter out the particulate matter (PM) generated by diesel engines. PM has been classed as carcinogenic by the World Health Organisation (WHO) since 2015, and it is linked to many serious health conditions if allowed to exceed strict limits, substantiated by a number of epidemiological studies.

In response, vehicle manufacturers (VMs) have advanced the design of diesel engines to reduce PM emissions to avoid over-loading the DPF and, in doing so, the particles have become smaller. This is not a problem as they are ‘caught’ by the DPF, ‘regenerated’, and turned into harmless CO2 and water when ‘burned off’. This is why a vehicle with a working DPF will emit less PM in an idle state compared to background PM in the air.

As we now know, the trade off with ‘regeneration’ of PM is the ‘generation’ of NOx. Whilst NOx is needed to increase the temperature of combustion to burn off the PM, unless treated afterwards, it will result in high NOx emissions, where one of the gases (namely NO2) is also particularly harmful to public health and monitored carefully against set limits by WHO.

So, whilst VMs have done a good job in reducing PM emissions, the laboratory-based type approval testing did not notice the high NOx emissions until recently (2017), when Real Driving Emissions (RDE) testing was introduced. With RDE as a final test, VMs have resorted to extra emissions reducing technologies, such as Selective Catalyst Reduction (SCR) and Urea, to neutralise the NOx into harmless nitrogen.

This ultimately means that many so-called pre-RDE Euro 6 compliant (and Euro 5) vehicles exceed NOx emissions during real driving, and this explains why NO2 levels have been increasing. As far as electric vehicles are concerned, there is still plenty of work to do with regards to infrastructure and green power generation. Heavier EV vehicles typically generate more tyre and brake particles compared to Internal Combustion (IC) vehicles.

When the DPF is fitted and working, the particles are captured by the walls of the filter, hence the term ‘wall flow DPF’. For a number of reasons, such as undetected combustion related faults, poor or inadequate maintenance, exceeded product life of the filter, unsuitable drive cycle, or even not having enough fuel in the tank, the DPF may become blocked and fail to regenerate.

To remove the blockage and the resulting ‘limp home’ mode, and to avoid the cost of resolving the cause of the problem and its replacement, DPFs are often removed or drilled out to create a full flow or partial flow system (instead of the wall-flow).

Although in some countries driving a vehicle where the DPF has been manipulated or removed is illegal or penalised such as the UK – the current MOT/PTI emission test, in accordance with the latest road worthiness Directive 2014/45/EU, does not typically identify or fail vehicles with leaking or compromised DPFs.

When the DPF is not working, high levels of toxic PM are emitted, resulting in poor air quality and harm to public health. When it functions correctly, PM levels are very low, protecting public health.

What can be done?

The current MOT emissions testing programme can be improved. In order to remove the so-called ‘gross polluters’, where the DPF is no longer functional, the current emissions test should focus on measuring DPF efficiency, instead of against an opacity limit that in fact already confirms a ‘leaking DPF’.

Vehicles with a working DPF should have a reading of less than 0.1k, and typically zero when tested against opacity. This is because the particles that would normally generate the ‘smoke’ are filtered. These results are in fact confirmed by the vehicle type approval test, which still requires an opacity rating, known as the plate value. However, VMs are currently allowed to add 0.5k to the measured result, which means that the typical plate value is just over 0.5k.

When testing modern diesel vehicles, the Road Worthiness Directive stipulates a default value of 0.7k for Euro 6 and 1.5k for Euro 5, even though both standards require a wall flow DPF for type approval compliance. 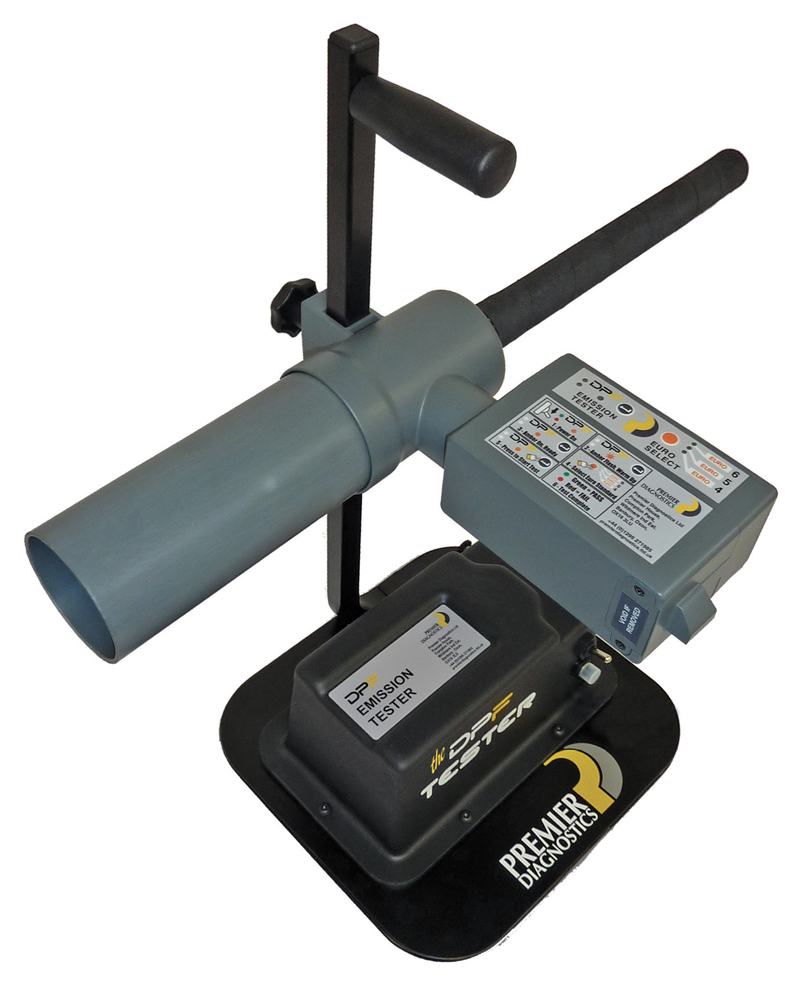 When testing modern diesel vehicles, the Road Worthiness Directive stipulates a default value of 0.7k for Euro 6 and 1.5k for Euro 5, even though both standards require a wall flow DPF for type approval compliance.

A simple vehicle database with plate values could be introduced to avoid the use of the higher default levels. In Germany, as of this year, a limit of 0.25k has been introduced for Euro 6 – this should increase the detection rate of malfunctioning DPFs.

The current Diesel Smoke Test is open to manipulation. For example, many VMs have limited the governor speed so that a vehicle engine speed cannot be accelerated at idle to the maximum rated RPM. This so-called free acceleration smoke test should also be performed within a specified duty cycle – any divergence affects the results of the test.

Furthermore, as the particles emitted have become smaller, the current Diesel Smoke Meter (DSM) testing technology that measures light absorption becomes less sensitive. Even at plate value, the DSM is unlikely to record and measure a compromised DPF on a Euro 6, despite the vehicle emitting millions of harmful particles.

These ultra-fine particles with toxic PAH coatings are in fact even more dangerous compared to the larger particles, due to their ability to penetrate deep into the lungs and migrate further.

What else can be done to identify faulty DPFs?

We can introduce a new test based on light scattering photometric technology, as tested by TRL in its latest report. It’s affordable, fit for purpose, traceable to industrial standards, and it tests at idle to measure particle mass when a DPF leaks. When the DPF leaks, creating a partial or full flow DPF, the device reads a high PM reading and fails the vehicle. When the filter remains intact as a wall flow structure, the DPF tester reads low PM and gives a pass.

Testers based on light scattering are much more sensitive compared to opacity technology, as currently used. On Euro 6, light scattering on its own will identify compromised DPFs as long as the particle number and size distribution is able to generate sufficient mass measurement. The advantages are clear: low cost, effective in removing high emitters without having to rely on opacity technology and the free smoke acceleration tests performed by DSMs, which are also open to misuse.

By introducing any of the above, vehicles measured as being high emitters or gross polluters would be identified in a fair and measured way for repair or removal from public roads. As reported in the GOCA report in Belgium, 20% of the high-emitting vehicles account for over 80% of the PM emissions. Furthermore, ULEZs can be restricted to vehicles with correctly-tested working wall flow DPFs only.

Premier Diagnostics is planning to measure the level of PM emitted by gross polluters (Euro 5 and 6 vehicles with compromised DPFs) during RDE testing, conducted independently by Emission Analytics, to highlight the effects on air quality and public health.